Houston Rockets point guard and former NBA All-Star MVP Chris Paul hosted Nickelodeon’s “Kids’ Choice Sports 2018” on Thursday night — and told TheWrap that it was his own children who persuaded him to take over the slime-fest.

“Our summers are usually busy but when the opportunity came up, they went nuts,” Paul said before show about his nine-year-old son and daughter, who is almost six. “This is a once in a lifetime opportunity.”

When asked if they’ve advised him on other major career moves, the former L.A. Clippers player told TheWrap: “They help with the trade situation and where we go, but this is probably the first executive decision they’ve made.” 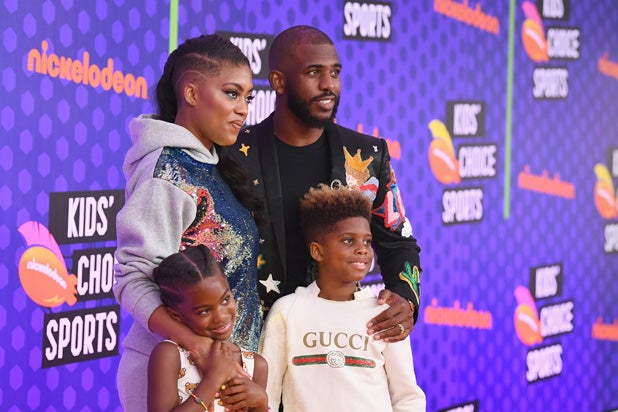 Paul took over the hosting gig from Seattle Seahawks quarterback Russell Wilson, who was a three-peat host of the messiest awards show in sports.

“Russell did a great job for the past three years, so for me it is just about making it my own. I am not coming in here saying I am trying to be Russell Wilson and outdo him, but the night is fun — it’s about the kids and celebrating the game.”

And who does Paul want to slime? NBA rivals LeBron James, Steph Curry? Nah, he’d rather keep it closer to home.

“I wish I could slime my kids or my wife,” he said, adding: “I think the coolest thing about the night is the Legend Award with the gold slime. I got to see Michael Phelps get slimed a few years ago, and the same thing with Kobe.”

This year, 2018 ESPYS host and former professional driver Danica Patrick had the honor of being doused with gold slime in recognition of her trailblazing achievements and outstanding sportsmanship.

Both the orange carpet and the Barker Hangar auditorium in Santa Monica, California, were packed with the biggest stars in the sports world Thursday night, with Paul, Wilson and Patrick being joined by the likes of Michael Phelps, Isaiah Thomas, Lindsey Vonn, P.K. Subban, Shaun White, Ronda Rousey and Antonio Brown.

Kansas Chiefs tight end Travis Kelce told TheWrap that he’d been a huge Nickelodeon fan since he was young. “I am going up against [former New England Patriots and Green Bay Packers TE] Martellus Bennett in a challenge … so if I win then I get slimed, which has always been a childhood dream of mine,” he said.

“I’d like to slime my brother [Jason Kelce], he plays for the Philadelphia Eagles,” he added. Wouldn’t we all?

LeBron James, Serena Williams, Odell Beckham Jr., Rob Gronkowski and Chloe Kim were among the big winners of the night, all now being the proud owners of the coveted mohawk blimp.

“Kids’ Choice Sports 2018” was taped live Thursday and will premiere Friday, July 20, at 8 p.m. (ET/PT) as a simulcast on Nickelodeon, TeenNick and Nicktoons.

CLUTCH PLAYER OF THE YEAR

DON’T TRY THIS AT HOME

PLAY OF THE YEAR