Chris Pratt has responded to a claim by actress Ellen Page that the church he belongs to is “infamously anti-LGBTQ,” saying that “nothing could be further from the truth.”

In an Instagram story shared by “The Lego Movie 2” actor on Monday night, Pratt said that his church “opens their doors to absolutely everyone” and that further, he is not defined by his church.

“My faith is important to me, but no church defines me or my life, and I am not a spokesperson for any church or any group of people,” Pratt said on Instagram. “My values define who I am. We need less hate in this world, not more. I am a man who believes that everyone is entitled to love who they want free from the judgment of their fellow man.”

According to the New York Times, Pratt is a frequent attendee of Zoe Church, which is an offshoot of an Australian megachurch known as Hillsong Church. It is popular among many celebrities, with locations in New York and Los Angeles. The Daily Beast reported that Hillsong was behind gay conversion therapy, and its founder Brian Houston wrote a blog post addressing his stance on LGBTQ individuals after Justin Bieber invited a gay fan to attend the church with him.

Last week while on “The Late Show With Stephen Colbert,” Pratt quoted a line from his pastor, saying, “If the spotlight that is shining on you is brighter than the light that’s within you, it will kill you.”

Page then shared the video clip on Twitter but said, “K. Um. But his church is infamously anti lgbtq so maybe address that too?”

Pratt further defended Zoe Church by saying that he was welcomed back despite his recent divorce from actress Anna Faris.

“They helped me tremendously offering love and support,” Pratt said. “It is what I have seen them do countless occasions regardless of sexual orientation, race or gender.”

Oh. K. Um. But his church is infamously anti lgbtq so maybe address that too? https://t.co/meg8m69FeF 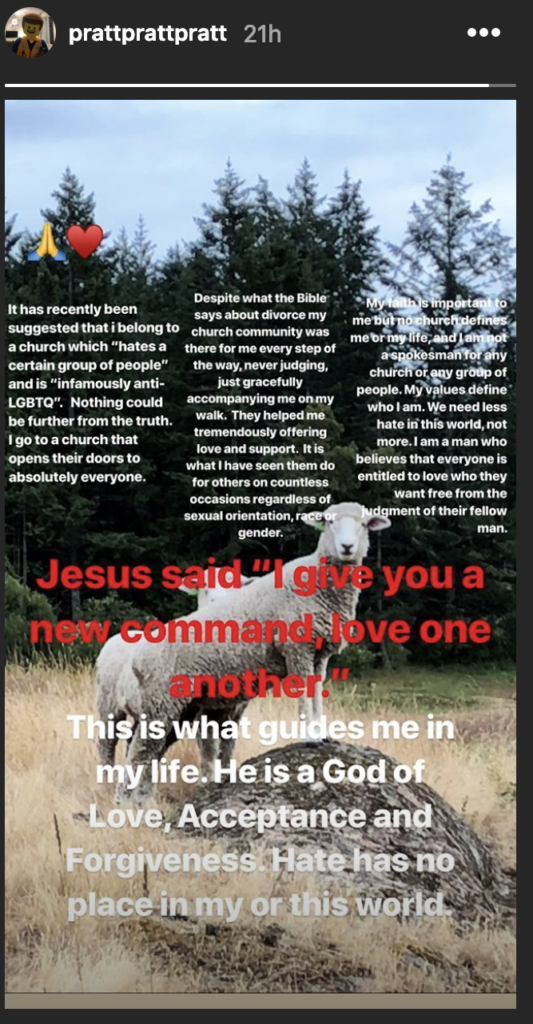