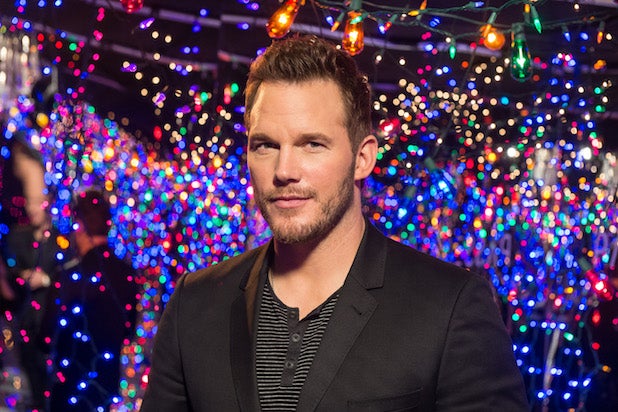 You can count on three things in life – death, taxes and Chris Pratt’s sense of humor.

When the actor headed to Tokyo to promote his new film “Guardians of the Galaxy Vol. 2,” he took to Instagram to chronicle his trip. After a few behind-the-scenes photos on set, a sit-in at a press interview, a “prom shot” with his beautiful wife actress Anna Faris and rubbing elbows with GotG fans, Pratt proved why he’s one of the most-liked guys in town.

(below) “#gotgvol2 here’s us backstage on set waiting to Guardian the Galaxy. Can’t wait for you to see these three in the movie. #rooker and @karengillanofficial are back, bigger and badder then ever and introducing #mantis @pomin8r who absolutely crushes!”

(below) “Here is a picture of @davebautista aka #Drax holding a baby doll while filming #gotgvol2 I don’t remember why he was holding this baby doll. He’s not weird.”

(below) “Here I sir [sic] next to a poster for #gotgvol2 discussing how this is probably the greatest movie in the history of cinema. Humbly. #tokyo”

(below) “My favorite outfit so far. #gotgvol2 #tokyo”

(below) “Had a great time greeting fans from Tokyo. These magical lot were dressed up like he Guardians. Moments like this you realize how much a movie can mean to people around the world. I can’t believe I get to be one of the stars bringing this movie to the screen. I’ve been crying a lot on this tour. Because, you know… they just can’t get my latte right. And I try to tel them “Peruvian breast milk!” How hard is that?still nothing. Urrrrgh.

“But seriously… The reason I’ve been routinely breaking down like a baby child is my overwhelming gratitude to @jamesgunn And I’m not even drinking so we’re talking about authentic tears. I can’t wait for the world to know my secret. #gotgvol2 is unlike any other movie in cinematic history. Up there with Godfather2 for greatest sequel of all time. And is far and away the greatest spectacle film ever. If you don’t have tix, link in my bio, probably gonna be sold out if not already. If not no biggie, you’ll see it eventually.”

Also Read: Watch a Shot-for-Shot Low-Tech Remake of the 'Guardians of the Galaxy 2' Trailer (Video)

(below) “My dear sweet @annafaris getting flashbacks from her hilarious role in Lost in Translation. Thank you for the support honey! You look so beautiful. These press tours can be such a whirlwind. I’m grateful to have you and the boy with me on this one. Although it’s 3:00am right now, I was just awakened by a square kick to the back as little man climbed into bed and then must have had a karate dream or something and now I can’t sleep. I’m on insta instead. All you dads and moms know what I’m talking about.”

(below) “Here #Drax invites everyone on the Milano to join his LinkedIn network. @davebautista is a loyal friend and excellent actor. I love him more with each passing day. He sits through hours of makeup and never complains. Not to mention the major advantage he gives us if we ever find ourselves in a movie cast vs movie cast celebrity death match.”

Check Out These New 'Guardians of the Galaxy Vol. 2' Images (Photos)

Marvel Studios released new official images from the upcoming “Guardians of the Galaxy Vol. 2,” showing off the new enlarged team

Marvel Studios released a new round of high-resolution still images from the upcoming "Guardians of the Galaxy Vol. 2." They don't give any new insight into the upcoming movie's story, but they do show off most of the movie's new and returning characters. Here are seven high-quality new images, plus a couple of looks behind the scenes from director James Gunn.