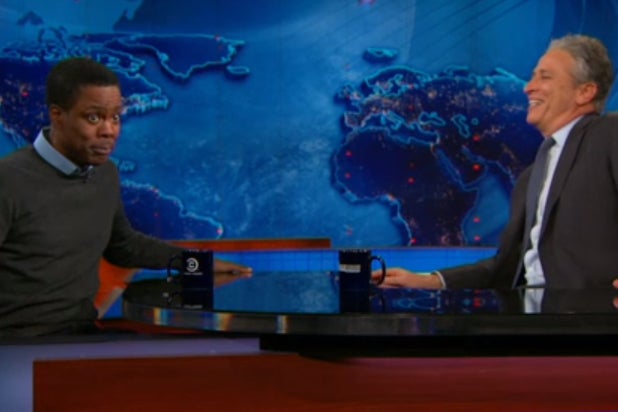 Chris Rock stopped by “The Daily Show” Thursday to promote his film “Top Five,” while also taking the opportunity to fire several shots right back at North Korea for hacking Sony Pictures and causing the release of rival film, “The Interview,” to be canceled.

“My movie is very Korean-friendly,” Rock joked. “We almost don’t kill any Koreans.”

“I can’t wait to see ‘The Interview,'” the actor added when he visited the Comedy Central show.

When Stewart asked if the stand-up legend thinks the Seth Rogen-James Franco comedy will ever come out, Rock replied: “Of course it’ll come out. You can buy it on 125th St. right now.”

Earlier in the show, Stewart railed against North Korea’s “Nerd Team Six” hacker squad himself. Stewart’s beef: Our enemy attacked Sony over “The Interview” but not the terrible “After Earth.”

Plus, the “Daily Show” host doesn’t even understand why Kim Jong-un isn’t all about Tinsel Town, anyway.

“Hollywood is just like North Korea,” Stewart said. “Everyone is always telling you how great you are, there are billboards everywhere with your face on them and no one eats.”

And watch Stewart’s opening, taking North Korea and its leader to task personally: