“Chris Wallace is joining CNN as an anchor for CNN+, the much-anticipated streaming subscription service that will debut in Q1 2022,” CNN said in a statement.

Wallace, who often pushed back against Trumpian conspiracy theories and misinformation regarding the election of Joe Biden, surprised viewers of his Fox News Sunday show with the announcement that he was leaving.

“After 18 years, this is my final Fox News Sunday. It is the last time — and I say this with real sadness — we will meet like this,” Wallace said. “Eighteen years ago, the bosses here at Fox promised me they would never interfere with a guest I booked or a question I asked. And they kept that promise. I have been free to report to the best of my ability to cover the stories I think are important to hold our country’s leaders to account.

“It’s been a great ride. We’ve covered five presidential elections, interviewed every president since George H.W. Bush traveled the world’s sitting down with France’s Emmanuel Macron and Russia’s Vladimir Putin. And I’ve gotten to spend Sunday mornings with you. It may sound corny, but I feel we built a community here. There’s a lot you can do on Sunday mornings, the fact you’ve chosen to spend this hour with us is something I cherish. But after 18 years, I have decided to leave Fox. I want to try something new to go beyond politics, to all the things I’m interested in. I’m ready for a new adventure. And I hope you’ll check it out.”

Wallace’s sudden exit comes one month after a report that he and fellow news anchor Bret Baier weren’t pleased with how opinion hosts on the network were being allowed to make false claims, and had recently “shared their objections with Fox News Media CEO Suzanne Scott and its president of news, Jay Wallace.”

Those objections eventually made their way to Lachlan Murdoch, chairman and CEO of the network’s parent company, Fox Corporation. Fox News representatives declined to offer statements regarding Baier and Wallace at the time, and Murdoch did not respond to TheWrap’s request for comment.

In the CNN news release, Wallace Said: “I am thrilled to join CNN+. After decades in broadcast and cable news, I am excited to explore the world of streaming. I look forward to the new freedom and flexibility streaming affords in interviewing major figures across the news landscape — and finding new ways to tell stories.”

He added: “As I embark on this adventure, I am honored and delighted to join Jeff Zucker and his great team. I can’t wait to get started.”

To cap off his sign-off though, Wallace encouraged “Fox News Sunday” viewers to stick with the program after his exit.

“And so, for the last time, dear friends, that’s it for today. Have a great week,” Wallace said. “And I hope you’ll keep watching ‘FOX News Sunday.’” 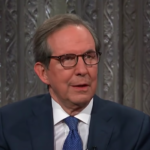 A new host for ‘Fox News Sunday’ has yet to be determined, and according to the network, the program will continue with a slate of rotating anchors for the time being.

“We are extremely proud of our journalism and the stellar team that Chris Wallace was a part of for 18 years,” Fox News said in a statement to TheWrap. “The legacy of ‘Fox News Sunday’ will continue with our star journalists, many of whom will rotate in the position until a permanent host is named.”

Wallace first joined the network in 2003. Before his tenure at Fox, he worked at ABC News for 14 years where he served as the chief correspondent for “Primetime Thursday” and a substitute host for “Nightline.” Prior to ABC, Wallace was NBC’s chief White House correspondent and moderated “Meet the Press.”