The plan granted $350 billion to state and local governments, who were encouraged by the White House to use some of the money to hire law-enforcement officials “even above pre-pandemic levels” to combat the recent spike in crime nationwide — a far cry from some progressives calling to defund the police.

“Congressman Banks, you voted against that package, against that $350 billion, just like every other Republican in the House and Senate. So, can’t you make the argument that it’s you and the Republicans who are defunding the police?” Wallace pushed.

To that, Banks replied, “Not at all,” before shifting the conversation toward comments that his Democratic colleagues have made. He didn’t get very far before Wallace shut him down and kept things on track. 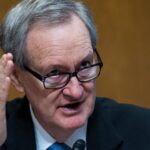 “No no no, wait, sir. Respectfully, I heard you make that point, but I’m asking you — there’s $350 billion in this package the president says can be used for policing,” Wallace continued.

Despite attempts by Banks to talk over Wallace, the host pressed on, bringing up specifics of what the money could be allocated to, including hiring more police officers, investing in new technologies and developing summer job training and programs for youth. Wallace doubled down, reiterating that Banks and his colleagues voted against this.

Banks once again brought up words from Democratic representatives, including Rep. Ilhan Omar and Speaker Nancy Pelosi, saying they’ve helped stigmatize “one of the most honorable professions in America.” Banks did concede that giving police departments more funding to help hire more officers — which he and his colleagues voted against doing — was “good,” but added that it didn’t matter in the long run because departments are having trouble recruiting.

You can watch the full exchange via the video above.