“Chrisley Knows Best” star Todd Chrisley is an Atlanta-based real estate mogul known for his sharp tongue and strong love for his family. As his USA Network series approaches the halfway mark in season 3 with more television plans on the horizon, Chrisley thanks God and the family’s solid fan base for their success.

The family patriarch — who has weathered bankruptcy, questions over his sexuality and drama with his son Kyle — spoke with TheWrap about raising five children in the spotlight with wife, Julie, Tuesday’s midseason finale and plans for spinoff series for him as well as his two teenage children, son Chase (19) and daughter Savannah (17).

The remaining six episodes of season three will air this fall, though no premiere date has been announced. See an exclusive clip of “Chrisley Knows Best” above.

What’s the hardest part about opening up your home to cameras?
We’ve never found it to be hard. We have been blessed with a truly wonderful partnership and relationship with USA Network who, from day one, said, “Allow us to be a fly on the wall, live your life and let us capture those moments,” and that’s what we’ve been able to do. We’ve had the same crew since season one. They’re like family.

What was your hardest moment from this season?
Probably going to see the memorial for the veterans for the Korean War in London, because my dad fought in the Korean War. He’s only been gone for three years, so that was probably the most difficult. 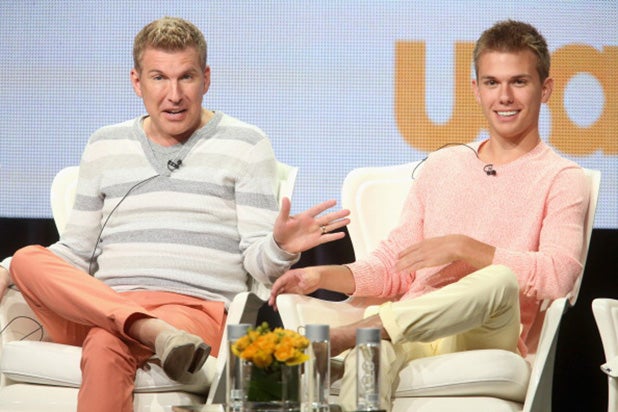 What is it about your family’s dynamic that has captured the hearts of so many people?
I would like to think that the fans, when they watch our show, see a family that has some of the same challenges that they are experiencing. Regardless of what the situation is in your life, as a family you pull together and you lift each other up. You can either laugh or cry — we choose to laugh.

Also Read: 'Chrisley Knows Best' Star Todd Chrisley on Duggars: 'It's Not a Scandal. It's a Sad Situation'

Your family has also faced controversy a few times, but you’ve managed to move past it and come out stronger. How do you protect your family from missteps and public embarrassment?
I don’t think that I do. We as humans all make mistakes. In order to truly be authentic and to be truthful to your fan base, they should be allowed to see your mistakes. If you make them and you own them, then learn from them. I don’t think you should hide from them.

You and your wife, Julie, are a married couple who didn’t crumble under the pressures of reality television. What would you say is the secret to a successful marriage, on-camera or off?
For Julie and I, we’ve weathered the storm. We’ve gone through the times in our life where we didn’t have money and then we’ve gone through the times where we had money. Then we lost money, then we’ve had it again. We’ve gone through the fact that Julie is a breast cancer survivor. When you’re down in the trenches with each other and you haul your way back up to where you want to be together, those are bonds that hopefully you don’t break.

Julie and I look at each other every day and my wife says, “Is there a younger, cuter girl out there who would find you attractive? Yes. But you better buy her an SUV, because you’re taking five kids and two grandkids.” We live our life with a sense of humor, but at the same token we have respect for each other.

Because of the success of the reality show, you now have a talk show called “Oh My Todd” in the works [the pilot was filmed on July 20]. Can you tell me about that?
When [USA] brought the show idea to me, I was blown away with gratitude. It’s a format where I feel I can truly shine and interact with the audience, because if it were not for the fans, I wouldn’t have that platform. I give all credit to the good Lord above and the fans for their support of us.

Your children Savannah and Chase might be getting a spin-off show about going to college. How far along is that project?
That [pilot started] filming on the 20th of this month [July]. The show is “Growing Up Chrisley” and it does follow them throughout their start off in college. They’re both very excited.

What can we expect to see in the midseason finale?
Grayson, who is the adventurer in our family — I don’t like adventures, I don’t like not knowing what I’m facing — for Grayson’s birthday, Grayson wanted to go to a dude ranch. Like Grayson wanted to go camping last season. Four kids, I’ve never had anyone want to go camping. I have my fifth one and he wants to do everything outdoors.

But he wanted to go to a dude ranch [watch the exclusive clip above], so you’re going to see every one of us out of our element. In the other episode, I just turned 47 and my kids are giving me a hard time about getting close to 50.