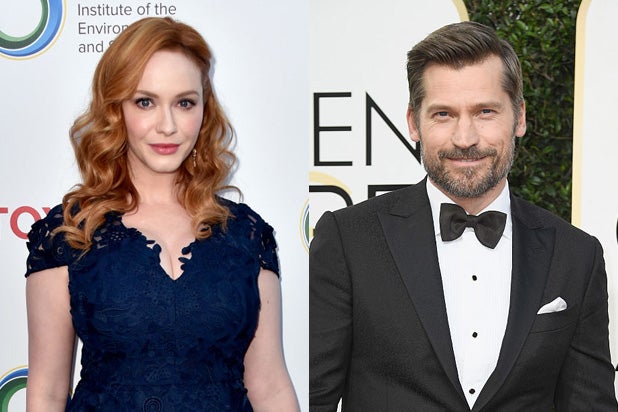 Christina Hendricks and Nikolaj Coster-Waldau are teaming up as Danish cops out for revenge in a new thriller from Brian De Palma.

“Domino” will star the “Mad Men” beauty as a police officer who helps a co-worker (Coster-Waldau) on a mission to find his partner’s murderer. Unbeknownst to them, their suspect is an American CIA agent tracking an ISIS terror cell.

The project is headed to this year’s Cannes market looking for a buyer. Michel Schønnemann is producer for his Schønne Film in Denmark, Antonio Perez of Spain’s Maestranza Films and Jaqueline de Gooeij for Zilvermeer in Belgium are co-producing.

The deal was negotiated by IM Global’SVP of Acquisitions and Co-Productions John Zois, who will handle international sales. ICM is handling domestic rights.

De Palma is best known for classics like “Scarface,” “The Untouchables” and the franchise-launcher “Mission: Impossible.”

Hendricks has had a quirky trajectory since the 2015 end of her seminal Matthew Weiner series on AMC. She’s popped up in Ryan Gosling’s “Drive” and his directorial effort “Lost River.” She’s done lowbrow shitck on the Comedy Central series “Another Period” and in the films “Bad Santa 2” and “Fist Fight.”

She also has a slew of indies in post-production, including “Crooked House,” an Agatha Christie adaptation from screenwriter Julian Fellowes. That costars Glenn Close, Gillian Anderson and Max Irons.

Coster-Waldau can currently be seen in “Small Crimes,” which Netflix acquired ahead of its SXSW Film debut.