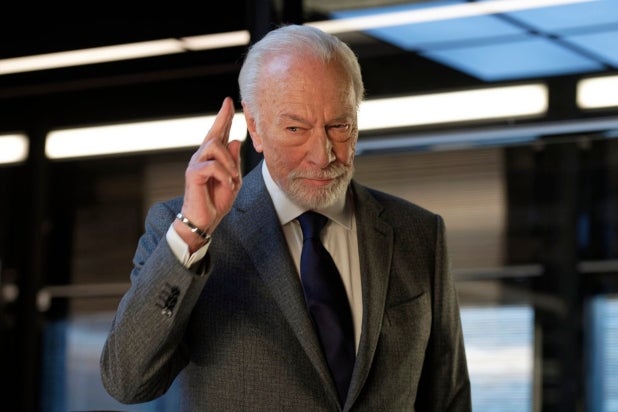 Christopher Plummer has never considered himself a “series guy” before, but things are changing.

The 90-year-old actor stars in Peacock’s new mystery-drama series “Departure,” which makes its U.S. premiere on Thursday after previously premiering in the U.K. earlier this year. The project is Plummer’s first series regular TV role in over 25 years.

Plummer plays Howard, a spirited mentor to a sharp investigator named Kendra, who is played by “I Know This Much Is True” star Archie Panjabi. Howard convinces her to return to the job in order to find out what happened to passenger plane Flight 716 after it vanishes somewhere over the Atlantic.

“He’s crazy about Kendra. The old guy might even be sort of in love with her,” Plummer said of his “Departure” character. “He’s brought her along and promoted her each time, and here’s a job that she doesn’t want to do really but feels she has to, and he’s constantly trying to please her and help her.”

The actor is known for iconic film roles including Captain Georg von Trapp in the 1965 musical “The Sound of Music,” his Oscar-winning supporting role in 2012’s “Beginners,” and most recently “Knives Out.” But Plummer isn’t exactly a stranger to TV — over his career, he’s appeared in select episodes of various miniseries and TV movies and narrated the children’s series “Madeline” and “The New Adventures of Madeline” in the 1990s.

His last true series regular TV role was as Alexander Addington in “Counterstrike,” a crime and espionage series which aired on USA Network for three seasons from 1990 to 1993.

Although the bulk of his work has been in films, Plummer knows it’s time to give TV a proper go.

“Now, everybody’s doing them,” Plummer said. “You’re kind of looked upon with disdain unless you’re a TV series guy.”

He’s also a fan of the genre, which, in his opinion, has been improving in relevance and quality of writing ever since “Game of Thrones” premiered in 2011. Plus, it passes the time during a pandemic.

“Thank God for television, as we’ve unfortunately discovered, because without television you have absolutely nothing to look at anymore,” he said. “Our house out in the country lost power… for two weeks it was absolutely wild. You couldn’t look at anything; nothing was happening. We realized how we do depend on television and what a medium it is. It’s the only one that you can watch at the moment — you can’t sit in theaters and you can’t sit in operas.”

At age 90, he’s nowhere near slowing down.

“What is extraordinary about being 90 is that I feel like I’m 60,” he said. Though he joked that Methuselah is “just a couple of years older than me,” he also said he hasn’t lost any of his pizazz.

He hinted that he’s got some more TV projects coming up, but he wouldn’t reveal the details — he says its bad luck to talk about a project before it’s fully off the ground. But no matter what his next move turns out to be, you can rest assured that Plummer has no plans of slowing down.

“Departure” is now streaming on Peacock.