NBC’s Chuck Todd was not in the mood for Rep. Dan Crenshaw on Sunday’s “Meet the Press.” And when the Republican congressman from Texas started insulting journalists directly, Todd pushed back.

During Crenshaw’s appearance, Todd grilled the congressman on why he signed his name to the Texas lawsuit last year that aimed to overturn the 2020 election outcome. Crenshaw that he stands by his actions, adding, “You guys in the press painted that as some extreme action and, of course, it wasn’t.”

Crenshaw defended himself by saying he was asking a “simple question” regarding election processes at the time, saying, “I did not vote to object, I voted to serve.” 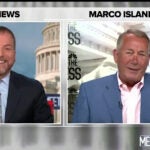 Todd countered that Crenshaw’s “specific question” has been “weaponized by the former president,” which was why he brought it up during Sunday’s show. “I understand you want to put this behind you, but he is the leader of your party, and he doesn’t stop talking about this nonsense,” Todd said.

Crenshaw responded by saying that Trump isn’t the sole leader of the party, and then complained once more that, “You guys in the press love doing this, and I get it. The press is largely liberal.”

To that, Todd clapped back. “Don’t start that,” the host interjected. “There’s nothing lazier than that excuse.”

Todd quickly started raking in praise on social media, while many simultaneously noted their surprise at the host’s ferocity, as he is frequently called out for not pushing hard enough. 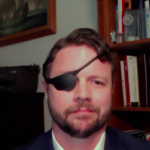 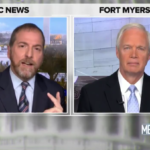