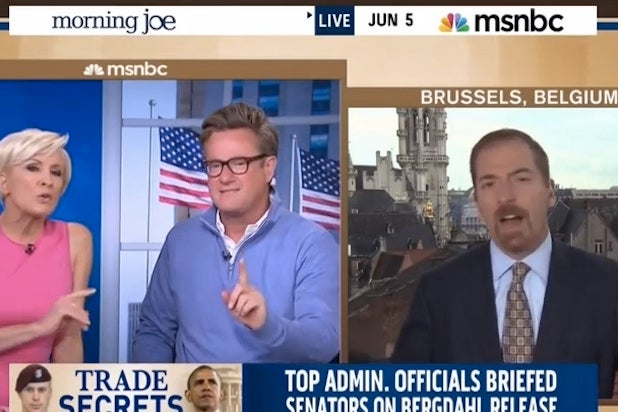 Chuck Todd and Joe Scarborough sniped at each other on Thursday’s “Morning Joe” about the controversy surrounding Bowe Bergdahl’s parents actions in reaching out to pro-Taliban fighters.

“Who wants to wait me here,” Scarborough snapped. “I can criticize parents that have reached out to the Taliban. Oh my God, Chuck!”

“That are missing a child?” Todd asked.

“If my son is out on the wire, and he is out there with fellow troops, and he writes me up and says he hates America and he’s thinking about deserting and he’s thinking about leaving his post, I can tell you as a father of that 26-year-old or 23-year-old son, I’d say, ‘Joey, you stay the hell right there,'” Scarborough said. “I’d call his commander. I would say, ‘Get my son, he is not well. Get him to a military base in Germany.’ I would not say, ‘Follow your conscience son.’ I would not reach out to the voice of jihad.”

“Any good father would not tell their son to follow their conscience and leave men and women on the line!” Scarborough added.

“Yes he is!” Scarborough said.