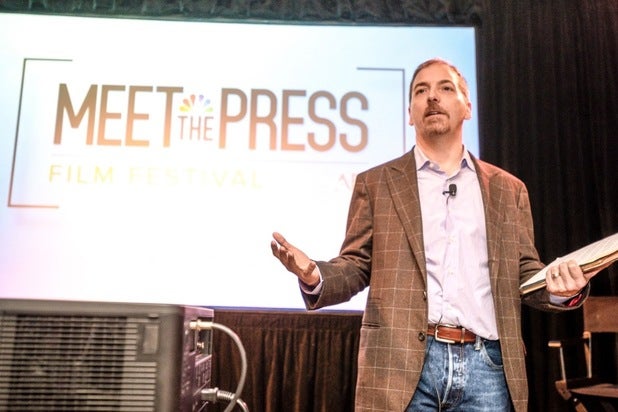 Ahead of the third installment of the Meet the Press Film Festival, Meet the Press anchor Chuck Todd and executive producer John Reiss spoke to TheWrap about expanding the Sunday show’s brand to keep up with the changing media landscape.

“I don’t know how else to do this job in this changing media environment where there’s a million places to go,” Todd said during a discussion of the daily MSNBC show, the podcast and the film festival spinoff of the hour-long political program. This year’s festival, in collaboration with the American Film Institute, will showcase more than 20 issue-based short documentary films from five countries, submitted by the likes of Netflix, HBO, A&E, ESPN and more. The films highlight topics like criminal justice reform, climate change, immigration, education and racial and gender equality.

Todd just celebrated five years at the helm of the signature show and, by extension, its growing brand. As far as ratings go, “Meet the Press” has ranked No. 1 across the board for three consecutive seasons and was the most-watched Sunday show in the key 25-54 age demo for the last 14 consecutive quarters.

For the show team, though, that’s not enough.

“I think that we have this trust that we’ve built. We have this brand integrity in ‘Meet the Press’ that is sort of iconic,” Todd said. “I just think we have an opportunity here and I don’t want to miss it. [Brand expansion] is, I think, a necessary business decision.”

Details in the big news stories change rapidly on any given day — even, in the time it takes him to leave his office to grab a coffee, Reiss lamented. And considering how many options consumers have when it comes to outlets, Sunday shows are now “from a different world,” he said, adding he heard from media critics when he became EP in 2014 that the format itself was “no longer relevant.”

Still, the major networks all still have their Sunday shows. What they don’t all have is the spread of associated spinoffs.

“We’ve been a step ahead,” Reiss said.

Also Read: Chuck Todd on Trump's 'Son of a Bitch' Diss: 'Challenge to All Parents When He Uses Vulgarities' (Video)

“More and more, especially as I’m trying to keep us relevant in the 21st century, I need to go where people are, not hope they find me,” Todd said.

According to him, “where people are” is actually watching short-form documentaries, taking in more on a topic that can be covered in a news segment.

“Don’t you feel like a little bit smarter?” he mused about the “feel-good” nature of taking in a documentary.

“It’s like a brain cleanse,” he said of the festival. “You don’t have to debate the inane. You’re actually diving in on something and you’re dealing with people who are passionate about a cause rather than a person.”