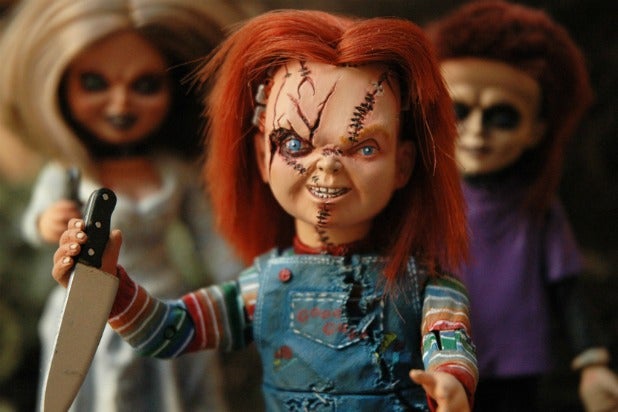 Chucky is slashing his way to television, with Syfy landing the rights to develop a series based on the famously red-haired, freckle-faced possessed doll.

The series, named “Chucky,” will be executive produced by Don Mancini, who wrote all seven films (and directed three) in the “Child’s Play” franchise, and David Kirschner, who produced all of the films alongside Mancini. Nick Antosca is executive producing as well under his company Eat the Cat, with Universal Cable Productions set as the studio.

“I’ve long wanted to bring Chucky to television and Syfy is the perfect network for us,” said Mancini, who will write the TV adaptation. “The show will be a fresh take on the franchise, allowing us to explore Chucky’s character with a depth that is uniquely afforded by the television series format, while staying true to the original vision that has terrorized audiences for over three decades now.”

Chucky, who is a children’s doll that becomes possessed by the soul of notorious serial killer Charles Lee Ray, first appeared in the 1988 film “Child’s Play,” which was directed by Tom Holland. The franchise spawned six sequels, the most recent being “Cult of Chucky” in 2017.

“It’s very rare that you get the opportunity to bring such an iconic character to your network, let alone with the original creator attached,” said Bill McGoldrick, president, scripted content, NBCU Cable Entertainment. “We look forward to working with Don, David and Nick on putting their blood, sweat, and more blood into bringing the ‘Chucky’ story to television.”

A remake of the original 1988 film is hitting theaters this year, via MGM and Orion, that will be directed by Lars Klevberg and produced by Seth Grahame-Smith and David Katzenberg. The June release stars Gabriel Bateman, Aubrey Plaza and Brian Tyree Henry.

Also Read: 'Deadly Class' Creator on the Importance of Adapting His Own Comic for TV: 'The Initial Spark Can Often Get Lost'

Additionally, Syfy has also ordered a pair of pilots with the working titles “Cipher” and “(Future) Cult Classic.”

The Danny McBride-produced “Cipher” follows a boy and his father in the middle of a war over artificial intelligence, while “(Future) Cult Classic” is a dark comedy which uniquely combines the genres of slasher films, high school drama and speculative satire.