USA Network and Syfy have renewed the “Chucky” TV show for a second season. Watch a Season 2 teaser video above.

The Season 1 finale airs Tuesday at 10 p.m. ET/PT on USA and Syfy. The entire first season will begin streaming on Peacock the following day.

A person with knowledge of future plans for “Chucky” told TheWrap that it is possible Season 2 will not be on both USA Network and Syfy, which are both owned by NBCUniversal (itself owned by Comcast). Additionally, NBCU’s streaming service, Peacock, may throw its plumage in the ring. 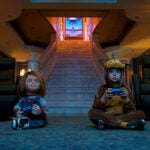 “We’re thrilled to start pulling the strings on a second season of puppet mayhem with ‘Chucky,’” series creator Don Mancini said in a statement on Monday. “Many thanks to our partners at USA, Syfy and UCP for their incredible support and guidance bringing ‘Chucky’ to the small screen, bigger than ever. And to the fans, Chucky sends his still-undying thanks, and a message: ‘This isn’t over, not by a long shot. You better watch your backs in 2022!’”

The series, an adaptation of the “Child’s Play” movie franchise, got off to a hot start. Combining USA Network and Syfy, the “Chucky” debut was seen by by 4.4 million total viewers within its first week, according to Nielsen. Of that sum, 2.1 million were in the 18-49 demo.

The “Chucky” series premiere also did well on YouTube, where the episode is available for free in its entirety on both the USA and Syfy channels. Those two have combined for more than 2.9 million views to date.