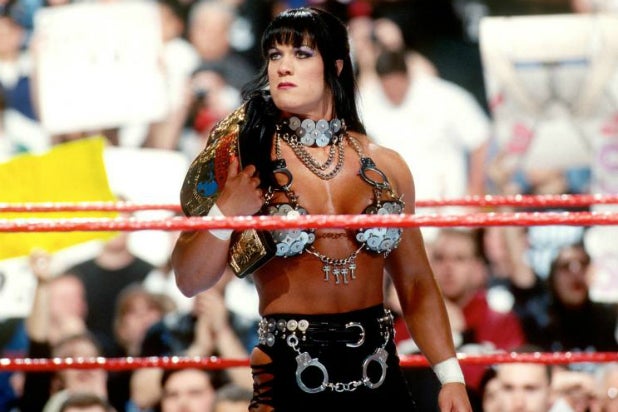 Legendary women’s wrestler Chyna is being inducted into the WWE Hall of Fame next month as a founding member of D-Generation X (DX). The WWE Universe is over the moon for the late Joanie Laurer, though a number of wrestling fans believe she is being shortchanged by going in as one member of a six-person faction, and not as a singles competitor.

“I think that X-Pac and Chyna deserve to get inducted into the HOF on their own, but DX as a whole getting in might be the best compromise we’re going to get for the latter,” one Twitter user wrote.

Another member of the social media site was much more critical of the call by WWE brass, calling it “load of bollocks” that “Chyna can’t get in there on her own merit.”

Also Read: D-Generation X to Be Inducted Into WWE Hall of Fame Class of 2019

Below is a mix of reactions from fans, wrestlers, entertainers and wrestling journalists. We’ve got blue checks and regular joes included in our compilation. Let us know how you feel Chyna’s induction as a part of DX in the comments section.

For the purposes of their group induction, D-Generation X consists of Triple H, Shawn Michaels, Road Dogg, Billy Gunn, X-Pac and Chyna. “Ravishing” Rick Rude is being considered a periphery member of the wrestling stable.

I think that X-Pac and Chyna deserve to get inducted into the HOF on their own, but DX as a whole getting in might be the best compromise we're going to get for the latter.

Just be happy Chyna is going into the HOF this year.

I’m glad Chyna is getting her place in the HOF!

Congratulations Chyna, you were an absolute sweetheart to me in Scotland all those years ago. In another dream, maybe we will have that match…. pic.twitter.com/DZ40jMmVbv

CHYNA SHOULD BE IN BY HERSELF. SHE SHOULDN'T BE OVERSHADOWED.

Some wrestling fans…if you gave them a $100 bill they complain they wanted 5, $20 bills.

So has Triple H just inducted himself into the WWE Hall of Fame or what? (it's a load of bollocks Chyna can't get in there on her own merit mind…)

Congratulations to our late trailblazing and gunblazing Ninth Wonder of the World CHYNA on being inducted into the WWE Hall of Fame! Well overdue. We miss you and we love you! pic.twitter.com/dsqOMIqbtq

Chyna going into the Hall Of Fame is dope as hell and way overdue.

Please don't be one of the people complaining about Chyna going into the HOF with DX just because it wasn't a solo induction. Every single member of the group could go in alone, but DX as a whole is undeniable in their influence. Not one person could say they don't deserve it.

Chyna is being inducted into the Hall of Fame as a part of DX. There is little doubt in my mind, that WWE obviously wants the positive media attention, and will eventually also induct her individually. She will be the only 2 time female Hall of Famer. Mark my words.

I know not everyone across the board will be 100% happy but they SHOULD be thrilled Chyna will be inducted. Her major run was part of DX. This puts her in the time capsule forever. Her legacy gets to be celebrated. All good things.

Chyna getting inducted in the HoF with DX

My girl is going into the Hall of Fame. Ugly crying all morning for Chyna. pic.twitter.com/wZetT2gZs3

Something has felt very off about WWE working hard to pioneer their women's division while not acknowledging the incredibly important contributions of Chyna, so it's pretty nice to hear that she's finally going into the Hall of Fame. Solo or along with DX, hardly even matters. pic.twitter.com/8GO05OJFCM