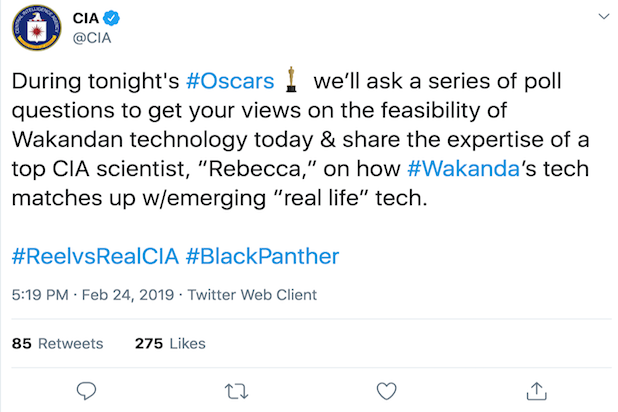 The CIA chose Oscar night to try to fact-check Marvel’s “Black Panther,” in case you weren’t sure if the comic-book movie film is completely real.

In a series of tweets, the spy agency pondered whether Vibranium, the fictional substance that powers the fictional nation of Wakanda, is based in fact. It is not.

“The #vibranium in Black Panther’s suit protects him from kinetic damage, & vibranium sneakers are both super-quiet & amazing shock absorbers for jumping. Those would be great for spies, right?” Too bad vibranium isn’t real,” one of the tweet reads.

The CIA, which has 2.5 million followers on Twitter, further explained that while Vibranium isn’t real, there are in fact “real-life materials that possess some similar qualities” to Vibranium.

The agency linked to an article on the CIA website about a scientist, identified as “Rebecca,” who has used taxpayer dollars, apparently, to look into the technology of “Black Panther.”

Topics that “Rebecca” covers in the article include the “Black Panther” communication technology and the Black Panther suit.

The CIA used the hashtag #ReelvsRealCIA.

While disproving Wakanda, the CIA did not mention its real-life experience with actual African nations.

On its own website, the agency discusses the assassination of Patrice Lumumba, democratically elected prime minister of the Democratic Republic of the Congo. The website references Emmanuel Gerard and Bruce Kuklick’s “Death in the Congo: Murdering Patrice Lumumba”:

In recent years, new evidence has emerged about this grisly event and those responsible for it. Of particular importance have been the gradually declassified files of the 1975-76 US Senate Church Committee’s investigation of CIA assassination plots against Lumumba, the report of a Belgian parliamentary inquiry in 2001, Congo Station Chief Larry Devlin’s 2007 memoir, and the long awaited appearance in 2013 of a “retrospective” Congo volume in the State Department’s Foreign Relations of the United States series, which contains extensive CIA operational documents from the 1960s.

In 2016, The Times newspaper said a former CIA spy “revealed his key role in the arrest of Nelson Mandela,” who was battling apartheid in South Africa. The former operative, Donald Rickard, said that at the time of his arrest in 1962, Mandela was “the world’s most dangerous communist outside of the Soviet Union,” the newspaper said.