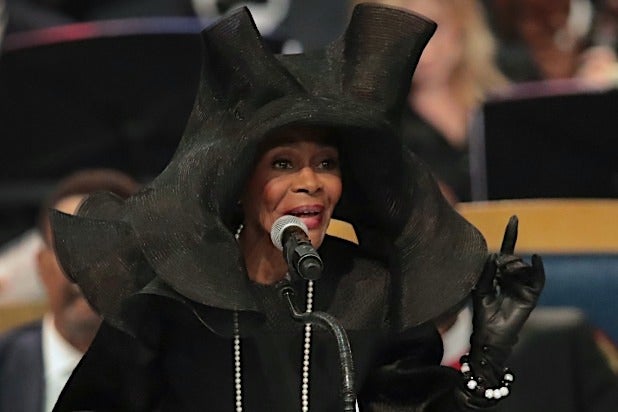 Cicely Tyson’s moving tribute at Aretha Franklin’s funeral on Friday was the talk of social media… as was her distracting, ginormous hat.

The 93-year-old “Help” actress wore a cascading, black hat to the service, and people were quick to pay homage to it online. Director Ava DuVernay tweeted a photo of Tyson with the caption, “Queen doesn’t feel like a full enough word for the majesty and living legacy of #CicelyTyson. I mean, she is every goal, every dream, everything. xo”

Queen doesn’t feel like a full enough word for the majesty and living legacy of #CicelyTyson. I mean, she is every goal, every dream, everything. xo pic.twitter.com/aQvA94o4wR

User Gugulethu Mhlungu quipped, “Cicely Tyson’s hat is what all the other hats want to be when they grow up.” Others seemed to agree, noting the sheer size of her head garb:

When auntie Cicely Tyson and her hat walked into the church I knew then what type of day it was going to be ???????? #ArethaFranklinHomegoing pic.twitter.com/stJsp4o9zW

My auntie said somebody shoulda took Cicely Tyson's hat and used it to cover up Ariana ???????? #ArethaHomegoing

#CicelyTyson hat is giving me Pslams 17:8 He shall hide me in the shadow of his wings. #ArethaHomegoing pic.twitter.com/wBPcEAvJfi

Cicely Tyson wore a pre-approved hat from Aretha ! Baby that thang is covering the whole church with the blood of Jesus #arethafranklin #arethahomegoing pic.twitter.com/VH50C4DQ58

She walked in to the hatter’s shop like GIVE ME ALL THE TULLE BITCH!

I am so sorry y’all, but… pic.twitter.com/czPRlf1ckj

Tyson also gave a speech during the late singer’s funeral service. “[Aretha] spoke to us through her soul and everything she experienced,” Tyson said softly into the microphone. “And thats why, no matter what she was singing, she moved every single person.”

Tyson joined other Hollywood figures, such as Tyler Perry and Whoopi Goldberg, in attending the funeral.