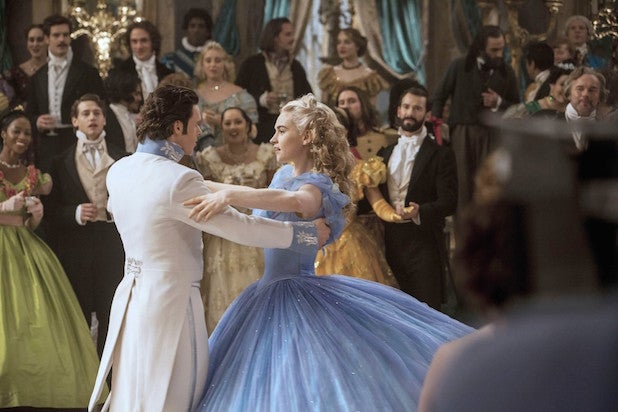 Disney’s “Cinderella” charmed its way to a $23 million first day at the box office by the time the clock struck midnight on Friday.

Unless it turns into a pumpkin, a $70 million opening weekend is within range for the bright and bouncy live-action update of Disney’s classic 1950 animated fairy tale. That would be right around the debut of Angelina Jolie’s “Maleficent,” the studio’s dark “Sleeping Beauty” reworking that conjured $69 million last May after a $24.2 million first Friday.

“Cinderella” has blown past last weekend’s No. 1 film “Chappie” and the only other wide opening movie, Liam Neeson‘s R-rated thriller “Run All Night, which is looking at a soft $11 million debut weekend after a $3.8 million Friday. The overall box office is running about 20 percent ahead of last year’s comparable frame, after two straight down weekends.

“Frozen”-fueled “princess power” was in full effect for this “Cinderella,” with 56 percent of the 77 percent female crowd under 25 years of age. They got what they came for – along with a 7-minute “Frozen Fever” short before the film began — and awarded an “A” CinemaScore. That’s in line with impressed critics, who have it at a sterling 97 percent positive on Rotten Tomatoes.

Lily James is the maiden transformed and Richard Madden her prince in this straightforward “Cinderella,” directed by Kenneth Branagh from Chris Weitz’s screenplay. Cate Blanchett is the wicked stepmother and Helen Bonham Carter plays the fairy godmother in the Walt Disney Pictures film, which was produced for $95 million — half the cost of “Maleficent” — by David Barron, Simon Kinberg and Allison Shearmur.

Neeson has lost some momentum as an action star. On its current pace, the Jaume Collet-Serra-directed “Run All Night” will finish under the weekend total of “A Walk Among Tombstones,” a similar thriller that fizzled in September. It would also be less than half the opening weekends of Neeson’s “Non-Stop” and “Unknown,” two other action films in which he teamed with Collet-Serra.

Joel Kinnaman, Ed Harris and Common co-star in the $50 million crime saga from Roy Lee’s Vertigo Entertainment, offered as a counter play to the female-skewing “Cinderella” by Warner Bros.