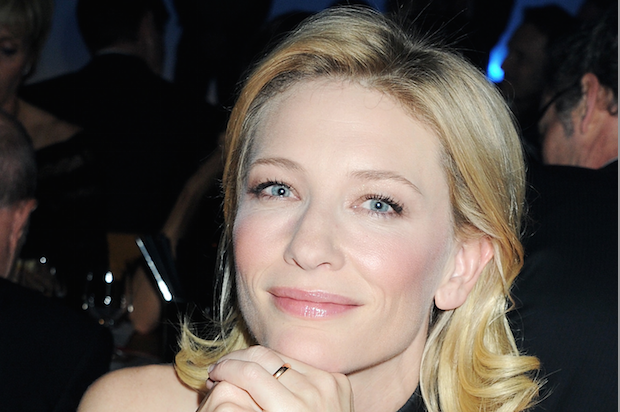 Walt Disney Studios is betting that new generations will embrace a lavish, live-action version of its animated classic “Cinderella,” teasing theater owners with new footage from the upcoming film at CinemaCon on Wednesday.

The footage depicted a young Cinderella, played by Lily James (“Downton Abbey”), collapsing after receiving news of her father’s death. She then meets her prince while riding spiritedly through a forest, followed by a glimpse of her mother’s ballgown ripped apart by her step-family. But then Cinderella appears in a dazzling blue ball gown that no doubt has the company’s Princess merchandising line preparing for pint-sized mass production.

The studio has tapped two talents better known for prestige fare than popcorn entertainments to help them realize its vision. Kenneth Branagh takes a break from the Bard to direct and freshly-minted Oscar winner Cate Blanchett portrays the villainous stepmother. While “Maleficent’s” marketing materials put Jolie front and center, footage screened for exhibitors largely left Blanchett glowering from the sidelines at her young charge or letting out a throaty laugh.

The film is more earnest in tone and less fantastical than other Disney efforts — save for a scene that finds Helena Bonham Carter as a flighty fairy godmother transforming a pumpkin into a carriage.

It may be more dramatic than, say, “Alice in Wonderland,” but the look of the picture is just as vibrant — think Merchant Ivory with production design courtesy of Donatella Versace.

Disney’s next attempt to mine its library for live-action fare is “The Jungle Book” swinging into theaters in October, 2015.