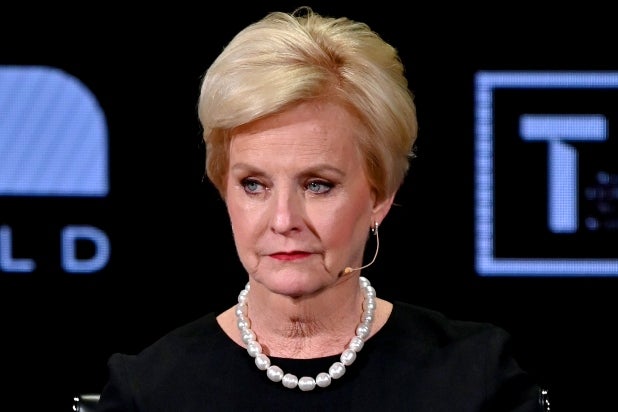 Cindy McCain and the co-hosts of “The View” dragged President Trump this morning over the maskless rally he hosted in Florida last night despite testing positive for COVID-19 less than two weeks ago.

“Listen, to me it’s a simple discussion. It’s all about arrogance and ego,” McCain said. “This is not presidential. This has everything to do with a personal agenda, and that’s why we need a change.”

The widow of former Arizona Senator John McCain and mother “View” co-host Meghan McCain, who is out for maternity leave, continued with a pitch for her candidate, Joe Biden.

“That’s exactly why we need Joe Biden in the White House: to stop this and act with character and dignity and leadership and empathy, more importantly,” she said. “We’ve lost over 200,000 people in this country to COVID, and still, he does things like this in Florida. It’s outrageous.”

Sunny Hostin referred to the president’s antics as “COVID-palooza”

“I think what was terrible was that he said he was immune to the disease. And the issue is that there is no immunity,” she continued. “There is no science-based evidence for that. And I think that what is so dangerous about him saying something like that is that people will then not wear their masks and not socially-distance. The care that this president got at one of the best military hospitals in our country would cost the average American $100,000.”

She continued: “This very administration is trying to gut the affordable care act, which is providing that type of health insurance to over 100 million Americans. When I saw that yesterday, I thought, oh my goodness, if someone at that rally gets the virus, they’re never going to get the care that this president got. Lives are at risk, and people could die just from attending that and listening to what he is saying.”

NO SOCIAL DISTANCING AT TRUMP RALLY: The co-hosts react to Pres. Trump’s first campaign event outside of Washington, D.C. since he announced his COVID-19 diagnosis earlier this month. https://t.co/egCEOcEGQU pic.twitter.com/uA9LZJThfv