“The Hurt Locker” scored yet another guild victory on Saturday night at the Millennium Biltmore Hotel in downtown Los Angeles, winning the award for sound mixing from the Cinema Audio Society.

Other nominees in the category were “Avatar,” “District 9,” “Star Trek” and “Transformers: Revenge of the Fallen.” Four of those films are competing in the Sound Mixing category at the Oscars; the exception is “District 9,” which was replaced by “Inglourious Basterds” by members of the Academy’s sound branch.

The Motion Picture Sound Editors, which gives awards for sound editing rather than sound mixing, gave two of its six film awards to “Avatar” on February 20; the others went to “Up,” “District 9,” “Inglourious Basterds” and “This Is It.” 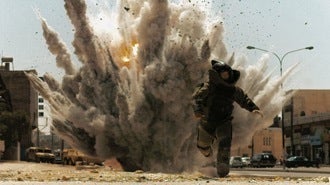 Sound Mixing for a Motion Picture: “The Hurt Locker”