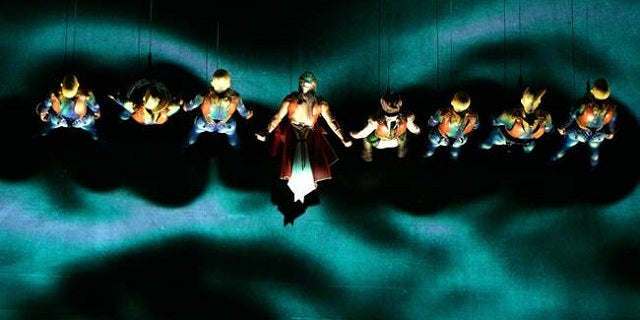 A Cirque du Soleil performer has died after falling Saturday night during a performance of the show "Ka" at the MGM Grand in Las Vegas.

Sarah Guillot-Guyard was killed in fall from the show's elevated vertical stage at the MGM Grand, a spokesperson for Cirque du Soleil confirmed to TheWrap.

The tragic incident marks first onstage death in the 30-year history of artistic acrobatic troupe, according to the Las Vegas Sun which first reported the news.

No formal cause of death has been determined pending further examination of Guillot-Guyard's body. She was born in Paris and had spent more than 22 years as an acrobatic performer. She was the mother of two young children.

According to reports from audience members, the incident occurred Saturday night during the latter stages of the production at MGM Grand. Guillot-Guyard was one of several performers suspended by a wire from the show’s vertical stage in the final scene. As she ascended to the top of the stage, she slipped free of her safety wire and dropped to the open, unseen pit below the performers.

An eye-witness, Dan Mosqueda, described the accident to the Sun as seen from the audience.

"She was being hoisted up the side of the stage and then just plummeted down," he said. "Initially, a lot of people in the audience thought it was part of the choreographed fight. But you could hear screaming, then groaning, and we could hear a female artist crying from the stage."

After the incident, a recorded announcement informed ticket-buyers that refunds or vouchers to future shows would be and the crowd was dismissed.

"I wish to extend my sincerest sympathies to the family. We are all completely devastated with this news. Sassoon was an artist with the original cast of 'Ka' since 2006 and has been an integral part of our Cirque du Soleil tight family. We are reminded, with great humility and respect, how extraordinary our artists are each and every night. Our focus now is to support each other as a family," he said.

"We have been working with the appropriate authorities and have offered our full cooperation. Performances of 'Ka' will be canceled until further notice."

On Wednesday night, a performer in one of the final preview performances of "Michael Jackson One" at the Mandalay Bay hotel suffered a concussion after slipping while on stage.