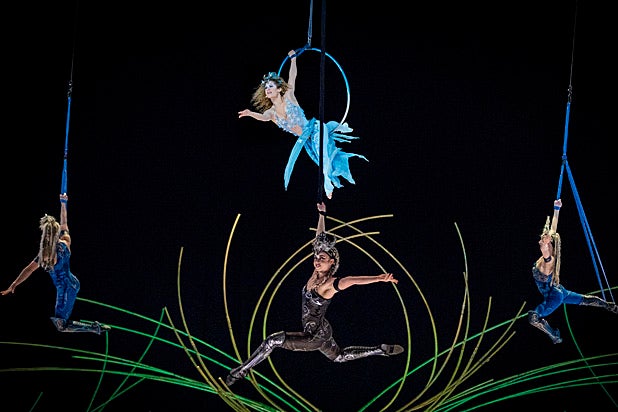 No specific projects were mentioned, but Cirque du Soleil is behind dozens of acrobatic touring performances and shows, including “The Beatles Love,” “Michael Jackson’s ONE,” “Zumanity,” “O” and many more. They acquired the Blue Man Group in 2017, and have also developed a show around the high-flying stunts of “Avatar.”

The company’s most recent show is “R.U.N.,” which opens in Las Vegas this fall and explores the world of movie stunts as it imagines a live-action thriller.

“Cirque du Soleil Entertainment Group is synonymous with high quality entertainment, regardless of the brand or product category. For us, the movie business is a logical progression for ongoing portfolio expansion, and Rideback is the perfect partner to embark on this journey,” Daniel Lamarre, president and CEO of Cirque du Soleil Entertainment Group, said in a statement. “Rideback is known for its ability to penetrate the movie industry with quality content. I look forward to the endless creative opportunities that will emerge by providing access to the immense Cirque du Soleil library of characters and storylines.”

“Cirque du Soleil has enchanted millions of people around the globe through soul-stirring artistry and journeys of the imagination that are Cirque du Soleil hallmarks. Their expansion into movies creates a one-of-a-kind, frontier opportunity to develop entirely new narrative features driven by the awe-inspiring worlds they have created,” Lin said in a statement.

Lin continued, “We’re thrilled to partner with Cirque du Soleil Entertainment Group, as we feel uniquely positioned to share in their mission. We built Rideback on an ethos of empowering storytellers, opening doors for a broader mix of voices, and helping creators feel free to take risks and explore new ideas. We think our unique development environment will help Cirque du Soleil unlock exciting new stories waiting to be told on the big screen.”

Rideback is behind “The Lego Movie,” “It” and Disney’s “Aladdin,” opening this Memorial Day weekend. Lin also recently announced the Rideback TV Incubator, a writers-in-residence program formed in partnership with MRC that creatively and financially supports and mentors TV writers from diverse backgrounds to help them create new shows for cable and streaming.