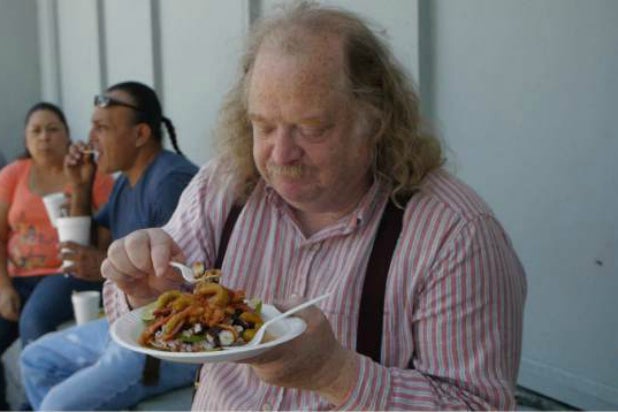 Like the street tacos its subject so enthusiastically devours, the new documentary portrait of food critic Jonathan Gold aims only to please. The beloved LA Times writer makes for congenial company in “City of Gold,” which offers a ride-along with one of the country’s foremost food critics as he visits restaurants in neighborhoods as far-flung as Alhambra and El Monte (but none west of Fairfax) in his beat-up pickup truck.

A classical cello student seduced out of his shell by the anarchy of punk rock and the leisurely braggadocio of West Coast gangster rap, Gold found his calling as a food critic 30 years ago. That’s an interesting tagline of a biography, but it isn’t a narrative that will sustain a 90-minute film. And so director Laura Gabbert pairs her wide-ranging, blithely fawning approach to Gold with a vision of Los Angeles as blinkered as it is tempting.

It’s difficult to overstate Gold’s importance in his domain. In 2007, he won the first-ever Pulitzer for food criticism, and the few excerpts of his reviews in the film reveal his to be an inviting, rhapsodic, hilarious voice. Gold bares a few other dimensions of himself for acolytes: his family, his environmental worries, his famous-ish friends (Calvin Trillin, Ruth Reichl, critic John Powers).

If you don’t know who Gold is, though, there’s little reason to watch this doc instead of catching up on his Times columns. According to Gabbert, his most distasteful trait is his tendency to procrastinate. And if you happen not to agree with Gold’s palate or pronouncements, well, he certainly won’t convince you of his rightness here. A hundred different dishes can be good in a hundred different ways, he shrugs. Okay, but that doesn’t me help me understand why Gold loves his (overly salty) favorite Thai restaurant so much. 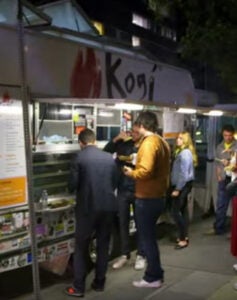 As suggested by the title, “City of Gold” is as much a defensive celebration of the metropolis the critic calls home, and it’s this half of the film that’s both so alluring and offensively myopic. One urban-planning talking head adds some class to the joint by praising Los Angeles for its “post-modern” (i.e., sprawling) grid. But Gabbert and her exoticizing camera — which looks at Korean, Chinese, and Latino people and neighborhoods as spices rather than the meat — fail to recognize that its sunny take on LA essentially romanticizes the city’s racial and class segregation.

In Gold’s apt assessment, LA isn’t a melting pot but a mosaic — a state of affairs that’s a result of decades of red-lining. Really good food is a pretty weak trade-off for institutional housing discrimination.

Gabbert appealingly channels Gold’s appreciation of various immigrant contributions to LA’s food culture, but the short interviews with some of the mom-and-pop restaurateurs — all foreign-born or the children of migrants — add up to a probably inadvertent white-savior narrative. The filmmaker seems unaware, too, that Gold’s status as the city’s (white) tastemaker over its hundred-and-one cuisines speaks as much to the incomplete democratization of food and opinion-making as it does to Gold’s vast experience.

When a second-generation co-owner of the Mexican restaurant Guelaguetza breaks down in tears recalling the critic’s validation of her parents’ Oaxacan cuisine, it’s a little disheartening to realize that it’s probably exactly Gold’s elite authority (as opposed to support from her own community) that gives his validation its unique power.

As accessible as his prose is to native English speakers, Gold is still a white guide to a largely white audience in a city where the majority of residents speak a different language at home. And that’s fine, but the film’s admittedly “utopian thinking” about Los Angeles grates early and often, even when Grabbert finally brings up the Watts riots late in her film in a gesture toward reality.

Also Read: 'Soul Food' Sequel Being Cooked Up at Fox 2000 With Original Cast

The documentary’s uncritical look at Gold does mean, also, that certain eyebrow-raising statements — like the fact that the critic feels he knows something about Myanmar after a handful of Burmese meals — go by unnoticed like oregano on pizza.

It’s impossible not to discern love, one of the documentary’s primary ingredients, while watching it. But “City of Love” is a dessert, not a main course; it’s a rush of sugar, and hardly filling at all.