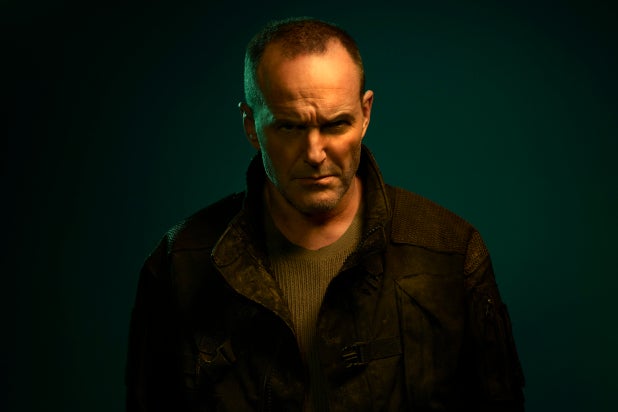 (Warning: This story contains spoilers from the Season 6 premiere of ABC’s “Agents of S.H.I.E.L.D.)

Phil Coulson may be dead (like, really dead), but Clark Gregg is alive and well, though this time he’s wreaking havoc against his former S.H.I.E.L.D. compatriots as Sarge. But just who the heck is this mysterious new character that showed up at the end of “Agents of S.H.I.E.L.D.’s” Season 6 premiere?

“He’s clearly not Phil Coulson,” Gregg says of his new character, the leader of a “dangerous set of humanoid creatures,” who spends the premiere episode emerging through portals from… somewhere unknown. “He finds it a little bit amusing and faintly disturbing that these people think they know him.”

The show’s fifth season ended with Coulson saying goodbye, courtesy of his short-lived stint as Ghost Rider that burned through the Kree DNA that healed him after his first death in Marvel Studios’ “The Avengers.” But co-showrunner Jed Whedon explained that they never would have said OK to a surprising sixth season renewal from ABC unless they could figure out a way to bring Gregg back without cheapening the impact of his character’s death.

Also Read: Why 'Agents of S.H.I.E.L.D.' Will Avoid Any 'Avengers: Endgame' Tie-Ins

“We didn’t believe the show exists without him,” Whedon said. “We wouldn’t have agreed to it if we didn’t think there was something to do.”

Gregg also poured cold water on anyone hoping for a third resurrection of Phil Coulson, saying, “I would say that that’s never completely off the table, but it’s not what we’re doing in Season 6.” Though Gregg, who directed the Season 6 premiere, only shows up at that very end of the episode, he teased that things will quickly ramp up.

After all, the first person to see his face is Melinda May (Ming-Na Wen), who was with Coulson when he died. “It quickly sets up a showdown where a bunch of people have to confront a very dark, powerful force, wearing the skin of someone they just lost,” Gregg said. “There’s a very complex mystery about where these people came from, and why anybody would come through these portals looking like someone they know.”

Also Read: 'Agents of SHIELD' Renewed for Season 7 by ABC

Gregg, who has played Coulson for five seasons on the ABC show, and made appearances throughout the early days of the Marvel Cinematic Universe, said it “really threw me off balance” to be playing such a different character, and one who is so mysterious at that.

“There was things I didn’t even get to know, what was going on with him, until we moved further along,” he continued, adding that Sarge has a “more ruthless way” of operating compared to Coulson. “All the things that make Phil Coulson, Phil Coulson, are not true of Sarge. Later as we move into the season, we start to go deeper levels into the mystery of why this creature is wearing a familiar face, and then things get really dark.”