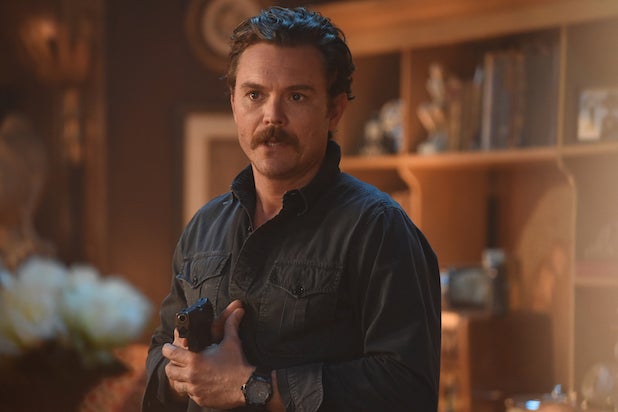 As the premiere of a Riggs-less third season of “Lethal Weapon” draws closer, ousted actor Clayne Crawford is recounting his version of the events that led to him being fired from the Fox action drama and replaced by Seann William Scott.

During an interview on the Drinkin’ Bros podcast on Tuesday, Crawford told “my side” of his incidents of bad behavior on set that were captured in footage that leaked after he was fired, including an outburst against an assistant director and an expletive-laced exchange with co-star Damon Wayans about an injury Wayans sustained while Crawford was directing.

“I knew that they had those tapes, and they had been blackmailing me with that… anytime I had a problem with [Damon Wayans],” Crawford said of the argument with the AD, noting he continuously had problems with Wayans (who played Murtaugh opposite his Riggs). Crawford said Wayans refused to do table reads or film inside a church due to his religion.

“This kind of s— came up all the time and I would go and I would complain,” Crawford said. “But once they had that tape they would say, ‘This will come out and it will ruin your career.'”

Crawford said when the outburst with the AD happened he “had to pay half of my salary for that episode, I had to spend six weeks in anger management every day on my lunch break, and I had to be escorted to and from set by a security guard, so it was humiliating.”

However, the suggestion that he had been screaming at children in a nearby pool on the tape — which started making the rounds after Variety, which first acquired the footage, posted it in June — is a “blatant f—ing lie,” he said.

“Clearly I’m yelling at the guy whose job it is to get the set quiet,” Crawford said, adding that the show was filming Episode 5 of Season 2 at a park by a cinderblock wall — not a pool. “And here’s the thing: Did I make a poor choice? Absolutely, and I felt embarrassed in the moment because I was belligerent, I was so angry. We’d been shooting a three-page scene for eight hours, OK? We were so behind, and we continued to try and shoot through all of this noise. So we called everyone in production. We stopped production over seven times. I called my agent, we were writing emails, we were phoning everyone we could to try and help us resolve the situation. No one would come in, no one would help us. So I shot all of my coverage in between the sounds.”

Crawford said he “snapped” because a young actor was unable to successfully perform in a scene, in which his character commits suicide, due to noise levels. “When this poor kid is sitting there with a gun to his head and he’s crying and he’s shaking and he’s done it f—ing 100 times… I snapped,” Crawford said.

The actor added he should have “walked away” but says he comes from a “blue collar background” and the “independent film world” where he is used to doing things differently.

Also Read: There Was a 'Very Real' Chance 'Lethal Weapon' Was Going to Be Canceled, Fox Boss Says

“Hollywood is very sensitive, so I should not have screamed and yelled, because it’s a bunch of delicate flowers there,” Crawford said.

As for the the tape in which he calls Wayans a “p—y,” Crawford said he’d been “putting up with his s— for two years” and “was just over it.”

The actor said the argument happened during an episode Crawford was directing, in which Wayans was hit with shrapnel. Crawford said Wayans called in sick on his first day of shooting and the on-set injury happened the day he returned. After that, Crawford said Wayans refused to do anymore stunts — or hold a gun on set — so Crawford tried to write around that.

“It wasn’t that he was injured, it was that he continued to say everyone targeted him,” Crawford said. “That’s when it made a turn and he started to say that people should be fired.”

When Wayans returned to set, Crawford said he couldn’t get his co-star to cooperate, and that’s when the exchange occurred, with Crawford suggesting his young son “would have taken that hit better than you,” to Wayans.

“They didn’t share the whole tape. They gave you just a nice little piece,” Crawford said of the footage posted by Variety, adding he told his co-star he could be replaced with Steve Harvey, Keenan Wayans or his own son Damon Wayans Jr. “I had to tell him that he’s a waste of space and that nobody cares.”

But, Crawford said, he “did not know” they had that tape or “expect” it to come out after he was fired. He also said he didn’t actually expect to be fired, nor did he ever get a formal call from studio Warner Bros. telling him he was, saying his final conversation with studio chief Peter Roth came after news first broke of tension on set.

“He said, ‘Clayne, I can’t promise you that I can save your job, but what I can tell you is that you have to make a public announcement apologizing, publicly, to Damon Wayans,'” Crawford said. “I was like, “What the fu–? Peter, why would I apologize publicly because he and I had a riff on set?’ And he’s like, ‘Clayne, that statement alone tells me that you don’t want to come back.” Crawford said he had the call on speakerphone with his family there. Roth said, according to Crawford, “If I were you, I’d look your children in the eyes, and I’d look your wife in the eyes, and you need to make a decision.'”

Crawford said he was conflicted about apologizing to Wayans publicly, because “he has made life miserable for me on this show” and he believed if he released a statement it would be used as justification if he was terminated.

But he decided to pen the apology because, “they said I mistreated my cast and crew, they knew how important this cast and crew was to me” and “then the next thing I know… I got fired.”

Crawford added that he doesn’t “hate” Wayans and instead blames the “leadership” on the show.

“I know they are making the show they always wanted to make, and I frustrated them constantly,” Crawford added of the upcoming season, featuring Scott, who is playing Murtaugh’s new partner, war veteran Wesley Cole.

Fox and Warner Bros declined to comment, and a representative for Waynes did not immediately respond to TheWrap‘s request.