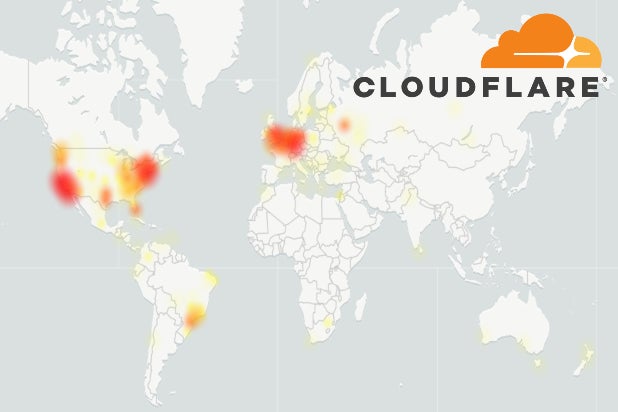 The outage happened around 2:15 p.m. Pacific and impacted the sites that depend on Cloudfare for about a half hour. Cloudflare said the outage was not the result of a hack or cyberattack.

“This afternoon we saw an outage across some parts of our network. It was not as a result of an attack,” a Cloudflare spokesperson told TheWrap Friday afternoon. “It appears a router on our global backbone announced bad routes and caused some portions of the network to not be available. We believe we have addressed the root cause and monitoring systems for stability now. We will share more shortly–we have a team writing an update as we speak.”

Cloudflare CEO Matthew Prince tweeted the company identified a problem with a router in Atlanta that led to several sites being inaccessible for the 30 minute period.

“Everything is restored now and we’re looking into the root cause,” Prince said in a followup tweet.

We isolated the Atlanta router and shut down our backbone, routing traffic across transit providers instead. There was some congestion that caused slow performance on some links as the logging caught up. Everything is restored now and we're looking into the root cause. 2/2

Beyond the sites mentioned above, Discord, Shopify, “League of Legends” and Feedly were also impacted by the outage, among other sites. The sites appeared to be functioning normally by about 3:30 p.m. Pacific time. Online outage detector DownDetector noted that Cloudflare outages on July 17 spiked around 3 p.m. Pacific Time.

The outage comes a few days after Twitter ran into a major issue with hackers taking over several prominent accounts, including those of former President Barack Obama and Tesla chief Elon Musk, asking followers to send bitcoin to a particular address; the hackers promised to send back twice as much bitcoin as followers sent them. The address has since received about $118,000 worth of bitcoin since the widespread scam.