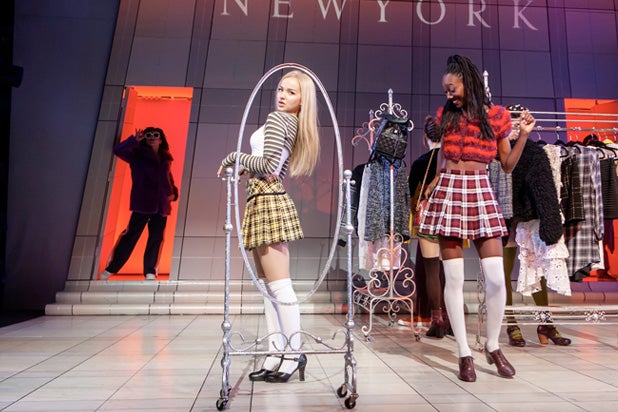 A few blocks from Broadway, where “The Cher Show” is raking in million-dollar weekly grosses, another musical with a Hollywood pedigree is putting a heroine named Cher in the spotlight. But as the mini-skirted Beverly Hills high schooler Cher Horowitz might say, this musical version of Amy Heckerling’s 1995 big-screen hit “Clueless” is mostly just whack. (The New Group production opened Tuesday in a 191-seat space at the Pershing Square Signature Center.)

Instead of following the example of other recent teen movie-inspired musicals like “Bring It On,” “Heathers” or “Mean Girls,” Heckerling goes the jukebox musical route, lifting ’90s hits from artists ranging from NSYNC to TLC to, gulp, Radiohead.

While some of the tunes are played pretty much straight, like Kim Wilde’s anthem “Kids in America,” most have had their lyrics radically reworked to fit into Heckerling’s ’90s-set storyline.

The problem, alas, is that Heckerling is no “Weird Al” Yankovic. The best of the new songs are cute, if random, as when a shopping visit to Barneys New York inspires Cher to belt out TLC-style, “No, I don’t want no shrugs.” Or when Cher and her best friend Dionne launch into Des’ree’s “Gotta Be” when they decide to fix up their hard-nosed teacher in hopes that he might be more lenient with extra credit, because “Love will save our grades.”

But others come off as embarrassingly amateurish: Heckerling’s take on Natalie Imbruglia’s “Torn” lamely rhymes “scorn” and “maple glazed popcorn,” while a 4 Non Blondes parody pairs “furthermore” and “El Salvador.”

The bigger problem is that all the elements that made Heckerling’s movie such a ground-breaking, genre-defying treat — its satirical energy, of-the-moment slang and clever reworking of Jane Austen’s “Emma” into a glossy high school rom-com set in Beverly Hills, of all places — here is watered down into the most generic of musical theater adaptations.

Peripheral characters and storylines are jettisoned, of course, and our mismatched lead couple is set up from the very outset and given parallel journeys (and musical genres), rather than emerging unexpectedly during the course of the story as they do in the movie.

Dove Cameron, a veteran of Disney’s “Liv and Maddie” and 2016’s “Hairspray Live,” bears a striking resemblance to a young Alicia Silverstone, and she has a strong pop voice. But she seldom flashes more than Cher’s superficiality as a stage performer — and there are no visible sparks with any of her co-stars, including her adorkable bookworm of an older stepbrother, Josh (Dave Thomas Brown, who seems to act mostly with his chin).

Some of the ensemble performers fare better, particularly Chris Hoch, playing multiple roles including Cher’s put-upon teacher and driving instructor. And Amy Clark’s costumes and Beowulf Boritt’s set design make the most of the Signature Center’s smallest theater space and what must have been a pretty tight budget.

But for the most part, this “Clueless” is just novocaine for the soul of anyone who loved Heckerling’s vastly superior movie.