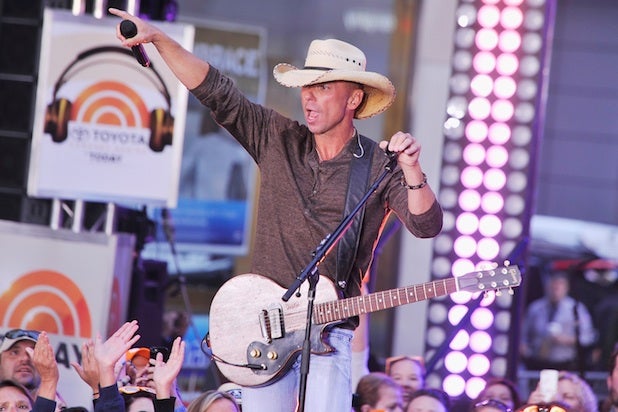 CMT soon will reveal its most music-packed programming slate ever. This fall’s offering includes two new specials, a new pop-up concert series and new episodes of returning series and specials featuring some of music’s biggest names.

The slate includes its new series, “Instant Jam,” a pop-up concert show in which superstar music acts surprise a small group of fans with an intimate performance. Kenny Chesney, who has sold more than 30 million albums worldwide, kicks off the series on Sept. 27.

“CMT understands the music … and the audience,” Chesney told TheWrap about working with the cable channel.

“They know how to capture the excitement of a live show or get inside the essence of a song,” he continued. “Being part of the MTV family, they’re also aggressive about the music portion of it when it comes to how the promote their programming. To me, it isn’t just what goes on the air, it’s how the shows are set up to be seen and perceived.

Next up, Florida Georgia Line gets a crack at surprising its fans on the episode airing on Oct. 17.

Then, Chesney returns to CMT for a new concert special on Nov. 14: “Kenny Chesney Live From the Flora-Bama.” The decorated country singer performs a monstrous 32 songs for his fans on the beaches where Florida and Alabama meet. This is his only concert of the year, and CMT is the only place Chesney wanted it.

“I love that we can capture the energy … both that tight, up-against-the-person-in-front-of-you intensity of a small club, and 40,000 people all coming together on the beach, on the water and anywhere they could find room,” Chesney said. “The intensity of both is apparent, and we can give it to people to tide them over ’til we hit the room next year.

“And it’s funny, because they are opposite ends of the spectrum, but you can see that energy in both,” he said. “I think when you can strip it down to a place the size of the Georgia Theatre in Athens and have the same energy you have on the beach at the FloraBama, that’s what you want to leave people with. CMT helps me do that.”

Additionally, CMT will air the CMA “Red Carpet Special” on Nov. 5. Hosts Cody Alan and Katie Cook will be there as all the stars arrive at the year’s big country awards event.

The slate also includes the return of CMT Crossroads, which features surprising pairings of musical acts. John Legend and Lee Ann Womack will share the stage on the episode airing Sept. 26. And “Inside Fame” returns with in-depth profiles of the biggest country music names: Hunter Hayes, Lady Antebellum and Big & Rich. It will then wrap the season with its annual CMT Artists of the Year, which celebrates the five biggest artists of 2014.

CMT INSTANT JAM: FLORIDA GEORGIA LINE
Premieres Friday, October 17 at 10 p.m. ET/PT
Country hit-making duo Florida Georgia Line surprises a small group of fans with a pop-up concert at Nashville’s Exit/In. Select fans will be treated to songs from their upcoming album, Anything Goes, in addition to some of their hottest hits from their smash album, Here’s To The Good Times.

CMA RED CARPET SPECIAL
Premieres, Wednesday, November 5 at 7:00 p.m. ET/PT
Hosted by CMT’s Cody Alan and Katie Cook, the CMA RED CARPET SPECIAL brings fans all the excitement live as country music’s biggest stars arrive for the 48th Annual CMA Awards show in Nashville. CMT hosts get the scoop straight from the night’s big nominees and performers, including a first look as they trade in their cowboy boots for country couture on the star-studded red carpet.

KENNY CHESNEY LIVE FROM THE FLORA-BAMA
Premieres Friday, November 14 at 10 p.m. ET/PT
Kenny Chesney throws a beach party like no other in the one-hour TV special, filmed live at his only concert of the year. More than 40,000 members of his No Shoes Nation packed the beaches where Florida and Alabama meet, where Chesney delivered a massive 32-song set to his fans for free at the Flora-Bama-Jama show. Filmed by director Shaun Silva, CMT brings the tank top, flip flop-laden concert to television in an exclusive world premiere event.

INSIDE FAME: HUNTER HAYES
Premieres Saturday, November 1 at 8 p.m. ET/PT
A four-time GRAMMY-nominated artist, Hunter Hayes is a multi-talented performer, musician, producer and writer. At 23, he’s amassed sales of more than nine million digital tracks worldwide, and earlier this year was named as one of Forbes Magazine’s “30 Under 30.” CMT chronicles the life of the musical prodigy turned country music superstar in the one-hour special episode INSIDE FAME: HUNTER HAYES, featuring candid new interviews with Hayes about his passions and his sophomore album, Storyline.

INSIDE FAME: LADY ANTEBELLUM
Premieres Saturday, November 8 at 8 p.m. ET/PT
INSIDE FAME: LADY ANTEBELLUM is the story and rise to fame of the 7-time GRAMMY-winning trio comprised of Charles Kelley, Dave Haywood and Hillary Scott. The one-hour special follows the group through the ups and downs and hard work of world-wide tours, five hit-filled albums and the pressures to push themselves out of their comfort zones as they continually challenge their approach to songwriting and recording. The show includes rare behind-the-scenes footage and exclusive interviews with Lady Antebellum, their families and fellow artists.

INSIDE FAME: BIG & RICH
Premieres Saturday, November 15 at 8 p.m. ET/PT
Big & Rich exploded onto the country music scene in 2004, spawning four consecutive hits including their wildly popular single “Save a Horse (Ride a Cowboy).” Now, a decade following their first album, the duo is prepping the release of their fifth studio album, Gravity. With a new album and tour, Big & Rich is ready to reclaim their position as one of the most creative and innovative forces in country music. CMT’s newest installment of INSIDE FAME: BIG & RICH recounts the rise to fame and the larger-than-life personas of John Rich and Big Kenny Alphin through all new interviews, never-before-seen footage, photos and more.

2014 CMT ARTISTS OF THE YEAR
Premieres LIVE Tuesday, December 2 at 8 p.m. ET
CMT will celebrate a remarkable year in country music by honoring the five biggest artists of 2014 in the live 90-minute special, CMT ARTISTS OF THE YEAR. This year’s five honorees will gather in Nashville alongside their peers and notable luminaries for an evening filled with rocking performances, surprise guests and cheers to the achievements of each CMT ARTIST OF THE YEAR.