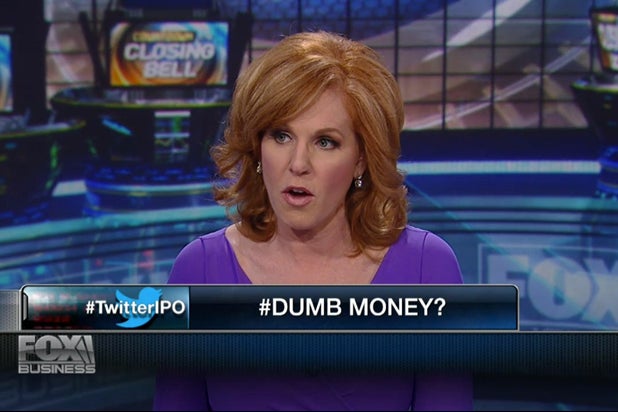 CNBC and Bloomberg’s interviews with Twitter execs on the day of the company’s IPO did not go down well with rival network Fox Business Network.

Instead of interviewing with all three business news channels, Twitter CEO Dick Costolo granted CNBC an interview before the company went public and spoke with Bloomberg on the floor of the New York Stock Exchange.

But when FBN’s producers tried to talk to Costolo, they were “escorted away,” according to FBN anchor Liz Claman, who slammed Twitter throughout her afternoon shows.

“In their young life as a publicly traded company, always claiming they think independently, did Twitter allow another business network to tell them how and where they can get their shareholders’ message out?” Claman asked.

“Their PR department is a-scared!” Claman later said. “They’re running scared from us!”

Claman also jokingly suggested that Twitter’s end-of-day dip was due to the company’s refusal to talk to FBN.

FBN’s Charles Gasparino recommended to viewers that they not buy Twitter stock until it went below $30, and called Costolo a “nasty, schevy, slimy nerd from Silicon Valley.”

CNBC has been especially aggressive in securing exclusive interviews over the past year; in January, the New York Post reported that the CNBC and FBN were engaged in a “booking war,” while NPR reported in February that CNBC had a written policy against booking guests who had appeared on FBN or Bloomberg the same day.

For the record: A previous version of this story stated that Costolo granted an interview to only CNBC. He actually had interviews planned with CNBC and Bloomberg. TheWrap regrets the error.