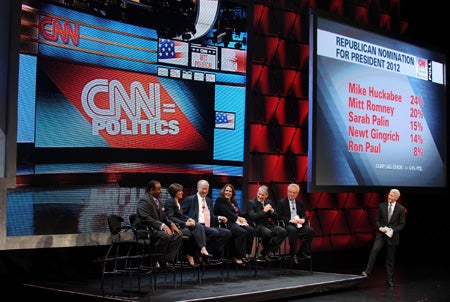 CNN made its upfront presentation to advertisers on Tuesday in New York, with executives stressing the network’s “nonpartisan” voice among the cacophony of its cable competitors and “good journalism” above all else.

“We’re the only credible, nonpartisan voice left,” CNN Worldwide president Jim Walton said at the Time Warner Center on Tuesday. “And that matters.”

The network – which has struggled in the ratings, falling behind Fox News and MSNBC – appears intent on pushing its D.N.A. of reportorial objectivity.

CNN president Jon Klein, who has been criticized for a sort of stubbornness to that end, said this: “We will never abandon our core faith in being the sole nonpartisan cable network in this country.” He said CNN’s goal is to have “no bias, no agenda.”

Greg D’Alba, CNN COO, said, “Journalism is our core value — it’s who we are.”

The network also announced a bunch of new Web products, including a blog network and revamped tech and entertainment sections:

Led by former OK! Magazine editor Katie Caperton, the section and its revamped blog, The Marquee, will feature beat coverage of television programming, such as live blogging of juggernauts like American Idol; movies, including reviews from iReporters; music; and a newsy, fresh look at celebrity and popular culture.

In addition to highlighting all the latest entertainment news, CNN Entertainment will include a new feature called “Trending Now,” revolutionizing how news and information is visualized and prioritized. The story selection in “Trending Now” is user-driven and constantly updated according to the related activity in CNN.com’s comments, as well as on Facebook and Twitter.

The site’s new technology section will feature coverage relevant to the daily lives of users across categories and beats, including Social Media, Mobile, Web, Gaming, Gadgets, and Innovation.

In addition to covering major news of the day across multiple verticals, CNN.com is launching a blog network that will amplify the strength and reach of CNN’s reporting resources. Covering a wide range of topics to inform, inspire and delight, the site’s featured blogs include:

· Eatocracy: Covering all news related to food – from recalls to health issues to culture;  edited by Kat Kinsman, former senior editor for AOL Food and of Slashfood
· Belief Blog: A fresh look at a topic that unites and divides: religion. Co-edited by award-winning religion blogger and author Dan Gilgoff; and Eric Marrapodi, Washington-based CNN producer pursuing a masters in religious studies from Georgetown.
· This Just In: Showcases the full power of CNN’s newsgathering packed into one blog, featuring any and every early detail about breaking news events. Edited by CNN.com writers Mallory Simon and Manav Tanneeru and updated by staff in London, Hong Kong and Atlanta.
· Afghanistan Crossroads: as one of the only news organizations with a permanent presence in Afghanistan, CNN staff there on the ground and around the world provide users with the latest news from the region as well as insight into what day-to-day life is for those who live there; edited by CNN senior producer Amy Cox.

Five Ways to Save CNN