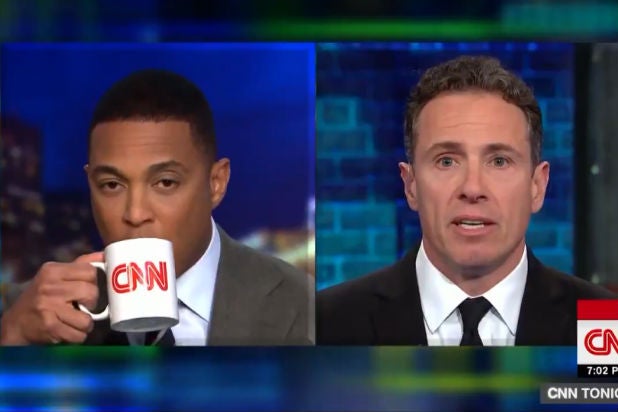 CNN anchors Chris Cuomo and Don Lemon engaged in a round of mockery on Monday evening in respond to President Trump’s objections to the Fox News town hall with 2020 Democrat Pete Buttigieg.

“How do you go bad on people who have carried you like a newborn for months?” Chris Cuomo asked.

“Because they’ve carried you like a newborn for months,” Lemon said. “They gotta wean him off. They gotta get him off.”

“You said it. I was gonna say it and I was like ‘can I say that?'” Lemon responded.

The joking between their CNN primetime shows came in response to a series of tweets from President Trump that had objected to his favorite network giving the South Bend mayor airtime.

“Hard to believe that @FoxNews is wasting airtime on Mayor Pete, as Chris Wallace likes to call him. Fox is moving more and more to the losing (wrong) side in covering the Dems. They got dumped from the Democrats boring debates, and they just want in,” Trump tweeted. “They forgot the people who got them there. Chris Wallace said, “I actually think, whether you like his opinions or not, that Mayor Pete has a lot of substance…fascinating biography.” Gee, he never speaks well of me – I like Mike Wallace better…and Alfred E. Newman will never be President!”

“What did Fox do that was so terrible?” Cuomo asked. “They’re giving his 2020 opponents air time. They’re doing their job.”

On Sunday, evening Buttigieg stormed the channel, easily putting away a town hall with anchor Chris Wallace and earning a standing ovation from audience members for his effort. He even took the fight to Fox opinion hosts, attacking Tucker Carlson and Laura Ingraham by name.

“When you’ve got Tucker Carlson saying that immigrants make America dirty, when you’ve got Laura Ingraham comparing detention centers with children in cages to summer camps,” he said. “Then there is a reason why anybody has to swallow hard and think twice before participating in this media ecosystem.”

On set, Wallace notably declined to defend them. Longtime Fox political analyst Brit Hume however was unimpressed by the president’s tweets and let him know about it publicly.

“Say this for Buttigieg,” Hume said. “He’s willing to be questioned by Chris Wallace, something you’ve barely done since you’ve been president. Oh, and covering candidates of both parties is part of the job of a news channel.”