CNN boss Chris Licht says the network plans to “reimagine” their morning show this fall, with the aim of shaking up the market.

“We will reimagine our morning show leveraging our correspondents and unmatched resources in the U.S. and around the world to provide news that viewers need to know as they start their day,” Licht told those in attendance at Warner Bros. Discovery’s Upfronts presentation on Wednesday morning. “[To] be honest there, we are seeking to be a disrupter of the broadcast morning shows in this space, and we believe we have the people and resources who can do it.”

Licht had no further details on morning show changes, but he did confirm that “Who’s Talking to Chris Wallace?” which got its start on CNN+, is moving to HBO Max, with production beginning this fall. Featured interviews will air on CNN.

“Part of the CNN brand is respectful, authentic and impactful interviews and one of the best interviewers in the business is Chris Wallace,” Licht, chairman and CEO of CNN Worldwide, said in a statement. “Chris and his team developed an engaging and compelling program that we’re excited to bring to HBO Max and include in our CNN Sunday evening programming.” 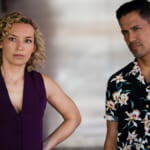 On Wednesday, the network also announced that “Eva Longoria: Searching for Mexico” will air on CNN. It was originally set to stream on CNN+.