Michael Wolff, the author best known for the tell-all “Fire & Fury: Inside The Trump White House,” appeared on “Reliable Sources” this weekend to promote his newest book — but also took the opportunity to air some of his grievances with host Brian Stelter.

What started as a general complaint about all media and Wolff defending comments he’s made in the past quickly turned into the veteran writer tearing into Stelter directly.

“I think you yourself, you know, while you’re a nice guy, you’re full of sanctimony. You become one of the parts of the problem of the media,” Wolff said bluntly. “You know, you come on here and you have a monopoly on truth, you know exactly how things are supposed to be done. You are one of the reasons why people can’t stand the media. Sorry! It’s your fault!”

At that, Stelter outright started laughing, before asking what he could or should do differently to not be part of the problem, as Wolff suggested. In response, Wolff took a page straight out of Aaron Burr’s “Hamilton” playbook. 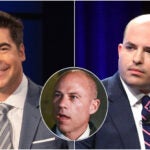 “Don’t talk so much,” Wolff replied. “Listen more. You know, people have genuine problems with the media. The media doesn’t get the story right. The media exists in its own bubble.” (Stelter did agree to that last assertion).

Wolff went so far as to compare Stelter to Donald Trump.

Though Stelter did attempt a few defenses of himself and his colleagues, he mostly just smiled, nodded and laughed at Wolff’s harangue. Eventually, Stelter asked Wolff outright why he would appear on the network so often, particularly in the last week, if he really believed the things he was saying. Wolff’s response was very candid.

“I’m a book salesman,” he said. That new book, by the way, is “Landslide: The Final Days of the Trump Presidency,” which released on July 13.

You can watch Wolff’s full remarks to Stelter via the video above.