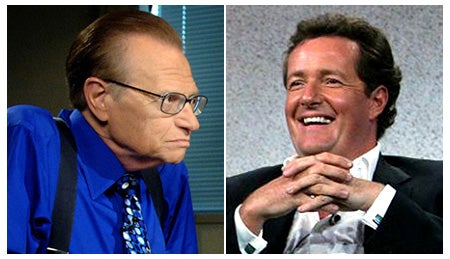 On the heels of a report out of the U.K. that “America’s Got Talent” and “Britain’s Got Talent” judge Piers Morgan is “on the verge” of a four-year, $8.1 million deal to replace Larry King, CNN is not publicly commenting on the report.

But it’s not exactly denying it, either.

Here’s the network’s official statement, via a spokesperson: "Larry King has been part of CNN’s past and will be part of CNN’s future." What that future looks like, exactly, is unclear.

King’s slumping ratings have been the source of much speculation at CNN, though big-name guests (Gaga, Obama, LeBron, etc.) helped the iconic 76-year-old attract viewers right after Memorial Day. (He just celebrated his 25th year at the network.)

Citing her own ratings struggles, King’s lead-in at 8:00 p.m., Campbell Brown, announced last month that she would step aside.  "The simple fact is that not enough people want to watch my program," Brown said, "and I owe it to myself and to CNN to get out of the way so that CNN can try something else."

UPDATE: CNN has issued another statement on the King situation: "Not surprisingly, there is no shortage of people who would love to succeed Larry King if and when he moves on, but rumors that we are close to signing a deal for a Larry King replacement are untrue. We are currently looking at replacing our 8pm program and that is our priority. Larry is a beloved member of the team, and he will continue to be part of the CNN family into the future."