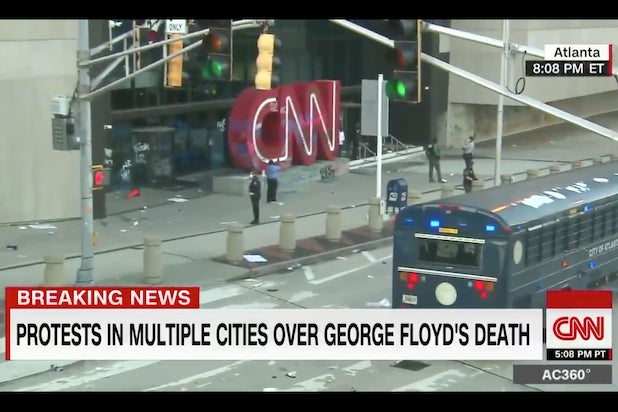 The CNN Center in Atlanta was vandalized on Friday during ongoing protests over the deaths of George Floyd and numerous other black men and women at the hands of police.

The large CNN sign outside the center was spray painted and protesters threw objects at the building, breaking windows, a CNN reporter on the scene said. Police ordered the protesters to disperse and created a blockade, but a standoff between demonstrators and police later moved into the lobby of the CNN Center (there is also a police precinct inside the center).

“This is terrible to witness,” CNN’s Nick Valencia, who estimated there were over 1,000 demonstrators at the scene, said. “We did see at one point … what we believe was tear gas fired at the demonstrators as they’ve been pushed back towards the main intersection.”

An organized protest began around 3 p.m., according to a local NBC News affiliate station, and marched from the Centennial Olympic Park area to the Georgia State Capitol. While that protest was largely peaceful, some of the demonstrators gathered around the CNN Center in downtown Atlanta and began throwing objects at police officers and setting fire to some objects.

“When you burn down this city, you’re burning down our community,” she said, visibly upset. “What I see happening on the streets of Atlanta is not Atlanta. This is not a protest. This is not in the spirit of Martin Luther King, Jr. This is chaos. A protest has purpose. When Dr. King was assassinated, we didn’t do this to our city.”

“If you care about this city, then go home,” she continued. Bottoms later added, “There was a black reporter who was arrested on camera this morning, who works for CNN. They are telling our stories and you are disgracing their building.”

The Atlanta protests are just one of many happening nationwide in the wake of Floyd’s death; he died after a white officer in Minneapolis choked him with his knee for several minutes. That officer, Derek Chauvin, was charged with third-degree murder and manslaughter earlier on Friday.

.@CNNValencia and crew take cover after an explosion takes place in the space between protesters and police at the CNN Center in Atlanta. https://t.co/mHZFrcOZj7 pic.twitter.com/HLPzyoKgn9

JUST IN: Multiple police vehicles have had their windows broken in front of the CNN Center in Atlanta. Protests are taking place in multiple cities over the death of George Floyd in Minneapolis. https://t.co/qyXUVIB6wp pic.twitter.com/wOXefI6G53