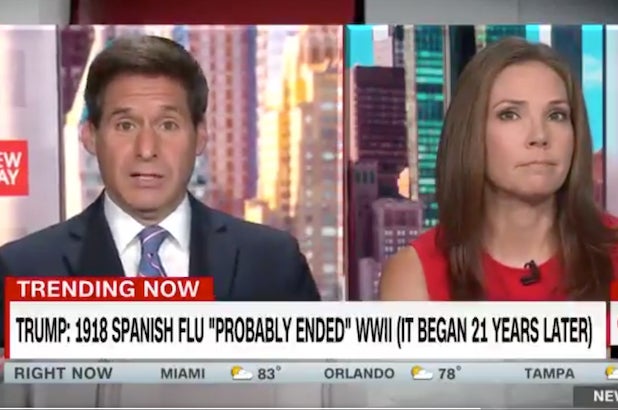 CNN “New Day” host John Berman on Tuesday fact-checked President Trump’s comments about the influenza pandemic — noting that the president was incorrect with his historical dates.

“The closest thing is in 1917, they say, right? The great pandemic certainly was a terrible thing where they lost anywhere from 50 to 100 million people. Probably ended the Second World War, all the soldiers were sick,” Trump said during a White House briefing the day before.

“Can you spot what’s wrong with this statement? For starters, wrong year, wrong war, and it didn’t end it. The great influenza pandemic was 1918, not 1917. 1918 was the end of World War I, not World War II, which was, you know, a lot later. And neither was ended by the flu,” Berman said in response to the president’s comments.

The morning show host then poked fun at the president for his mispronunciation of Thailand as “Thighland” during a speech last week.

“Now, aside from that, the president’s statement is pretty much dead-on correct. So hats off to him,” Berman deadpanned. “It is worth noting that both wars had memorable wars in ‘Thighland.'”

Watch the clip, which Berman posted to his own Twitter, below:

Wrong year, wrong war, and it didn't end it. But both wars did have memorable battles in Thighland @NewDaypic.twitter.com/H9yxc7PaqP