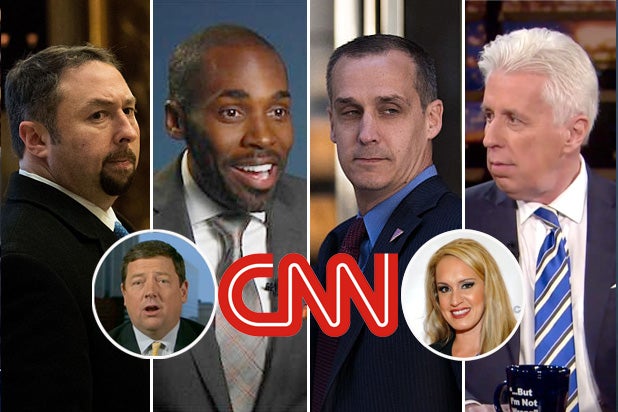 Why does CNN have such a hard time holding on to its right-wing contributors? This weekend, former Trump campaign spokesman Jason Miller became the sixth conservative CNN contributor to lose his perch at the network since the 2016 election.

While liberal stalwarts like Reza Azlan and Kathy Griffin have also been shown the door, Trump defenders have long been an endangered species at CNN.

Some suggest that the network has an antipathy for conservative voices. “People who support Trump, [CNN] treats them like second-class citizens,” said one insider who has appeared frequently on the channel but asked not to be identified. “There is an extraordinary target on anyone who is pro-Trump back at CNN.”

“Sadly, CNN seems to have two standards: one for Trump supporters and an anything-goes standard for liberals or anti-Trumpers,” said Jeffrey Lord, a GOP strategist who was dumped by the network in August 2017 after tweeting the Nazi salute “Sieg heil” in an online spat.

CNN never announced any disciplinary action against liberal commentator Phil Mudd after he dropped the N-word on air in January during a live appearance with Don Lemon; he continues to appear frequently on the network. And Ryan Lizza, who was fired from the New Yorker last December after a sexual misconduct accusation, returned to CNN after a roughly six-week suspension by the network.

“One can sit on CNN and use all kinds of racial slurs, not to mention call the President of the United States Hitler or compare him to Stalin and more, and that’s OK,” Lord said. “It is incredibly sad to watch and I think very self-damaging to a network filled with serious professionals and good people for whom I have the greatest respect.”

Others suggest that the strongest and most reliably TV-ready right-wing commentators have been snapped up by Fox News, leaving its rival to lesser pundits who may not be as ready for the glare of the spotlight.

“If you’re talking about D-listers, it’s not people who are super-polished,” said another frequent CNN guest. “It’s people who were attracted to guerilla warfare. They won’t be the most accepted at the garden parties at the Louvre.”

For some, the network will face trouble no matter what given the extremes to which conservatives sometimes go to defend President Trump.

“The problem is with the position itself,” said Angelo Carusone, head of the left-wing watchdog group Media Matters for America, and the one on the receiving end of Lord’s tweeted Nazi salute.

CNN declined to comment for this story but an insider said the network was puzzled by the mass exodus of Trump commentators in the last two years.

“No one really knows,” the individual said. “It would be clearer if they were leaving all for the same reason, but that’s not the case.”

Still, the network’s challenge in retaining right-leaning voices is real. In a statement on Saturday, Miller said he decided to voluntarily “step away” from CNN following an accusation by a former lover that he secretly gave another ex abortion pills contained in a smoothie (he has denied the accusation).

Miller’s ouster comes cuts one month after CNN suspended Paris Dennard, a former official in the George W. Bush administration who faced a sexual misconduct accusation stemming from his time as an events director at Arizona State University.

Just days before, Dennard had earned praise from conservatives — and a tweeted shout-out from President Trump — for a bruising on-air dog fight with Mudd over whether retired government officials like ex-CIA chief John Brennan could score extra cash by leveraging their security clearances.

A CNN spokesperson declined to elaborate on the status of its investigation into Dennard.