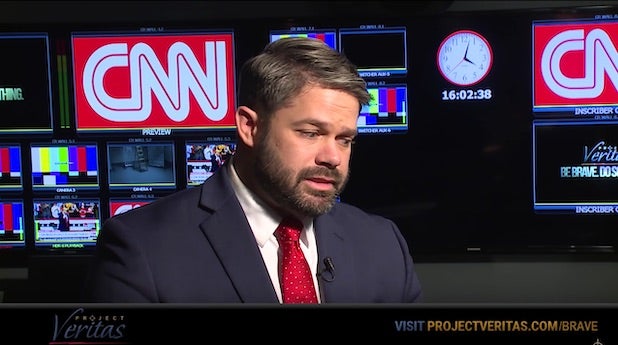 CNN says none of the people included in a Project Veritas video that purports to expose left-wing bias at CNN are actually CNN journalists.

Project Veritas, the right-wing activist group that has tried to conduct previous sting operations to expose journalistic bias, released its CNN video on Monday. But the network said none of the people exposed in hidden-camera footage taken by a “whistleblower” were actually journalists at CNN — including the “whistleblower.”

Project Veritas’s #ExposeCNN operation relied on video footage taken by Cary Poarch, who said he was a “CNN insider” at the network’s D.C. bureau. But according to a CNN spokesperson, Poarch wasn’t a CNN employee and was instead a freelance satellite truck operator whose company had been contracted by the network. Poarch had given notice prior to the release of the tapes, the spokesperson said.

Included in the videos, some of which contain noticeable cuts, are clips of people talking about CNN’s bias against President Donald Trump.

One video featured comments made by Nick Neville, who is identified as a “media coordinator” at CNN. He said CNN president Jeff Zucker had an “ongoing feud with Trump since ‘The Apprentice.'” (Zucker green-lit “The Apprentice” when he was head of NBC Entertainment.)

The CNN spokesperson said that Neville was only a junior employee at the network, not a journalist, and would not have had access to Zucker or knowledge of the topics in which he was speaking about. Neville did not immediately respond to a request for comment.

Other recordings from inside CNN include calls from Zucker, some of which feature him telling his staffers to focus on news of impeachment and criticizing Fox News for “years of fake news conspiracy nonsense.” Zucker has made similar comments before. In 2018, he called Fox News “state-run TV” and a “propaganda machine” at a conference in New York City.