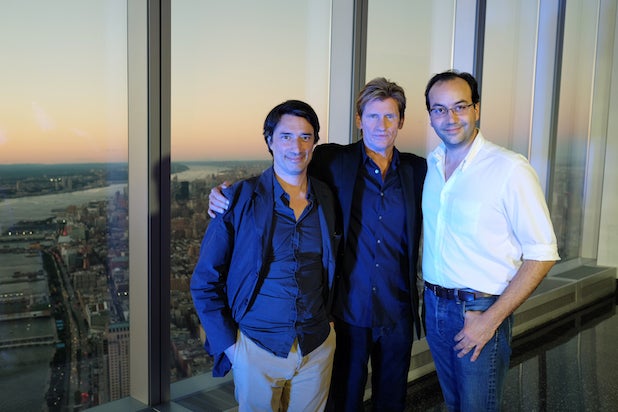 On the morning of Sept. 11, 2001, firefighter James Hanlon shot footage alongside two French filmmakers for what was supposed to be a documentary about a probationary firefighter. Their camera panned to capture something in the sky that seemed impossible.

What they saw from the Duane Street firehouse was American Airlines Flight 11 hitting Tower One of the World Trade Center. Their footage aired on CNN that night, quickly gaining comparisons to the Zapruder film. This weekend, to mark the 15th anniversary of that hellish day, the footage will return to CNN.

Hanlon and the the brothers, Gédéon and Jules Naudet, used the images as the basis for the 2002 Peabody and Emmy Award-winning documentary “9/11,” now updated with the new title “9/11: Fifteen Years Later.”

“There hasn’t been a day, maybe two days tops, that I haven’t spoken to one of the guys from that day. I always try to go to the picnics, go to the events at the firehouse, and really stay in touch. We’ve never left that bond. Gédéon and Jules were right there with us. It’s like they were brought into a family,” Hanlon, who retired as a firefighter in 2007, told TheWrap.

The trio updated the film five years ago for CBS, and hope to update it every five years. This year’s version looks at people in the original film who since died because of exposure to smoke and toxic dust — three of them first responders from Duane Street.

“It’s very strange, whenever September 11 comes around, especially on big anniversaries, you always have a moment where it feels like it was yesterday… other moments feel like it’s been a long time,” Jules said.

The film also explores “legacy kids” — young people who lost a loved one to the attacks and have honored their dead by becoming firefighters.

“We can see the time pass when we look at our own lives and the lives of the guys at the firehouse and everything they went through. They went through quite a lot, from the psychological trauma to the deaths,” Gédéon said.

For this year’s move to CNN, they added a new introduction from “Rescue Me” star Dennis Leary, an old friend of Hanlon’s who has long fought for firefighters. The film is now called “9/11: Fifteen Years Later.”

Hanlon says Hollywood can never recreate what he saw in real life.

“What you can shoot with a Hollywood camera, you can never capture what a documentary captures. When you see the footage from inside [the tower], you’re looking around and you see the faces, you can get never get an actor to even play that,” he said.

Still, he said, Oliver Stone‘s “World Trade Center” was a fairly accurate portrayal of the experience of two Port Authority officers who were trapped in the rubble. And he has nothing against Hollywood: He went on to work for CBS’s “NCIS: Los Angeles.”

The Naudet brothers and Hanlon still spend September 11 of every year at the firehouse.

“For us, it’s about preserving the memory of that day,” said Jules.