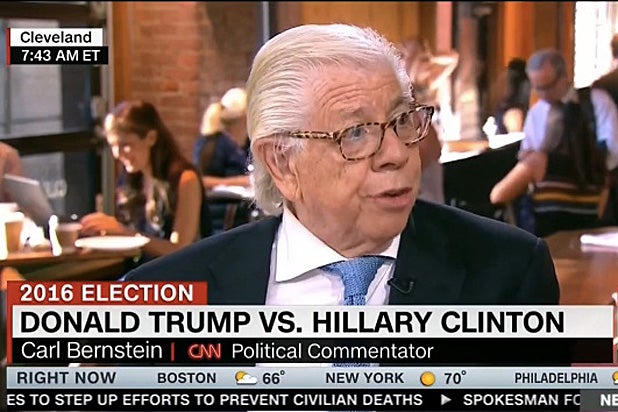 Bernstein spoke to TheWrap at one of CNN’s several broadcast centers at the Republican National Convention, this one beside the Quicken Loans arena in Cleveland, Ohio, where the evening speeches had already begun.

Said Bernstein of Ailes: “His influence is enormous. He single-handedly, using sleight of hand and the phrase ‘fair and balanced’ – which it isn’t – in terms of the culture wars [created] as important an instrument as has existed in setting the agenda for the country. “

But the journalist insisted that CNN is not rejoicing at the widespread reports that Ailes’s exit is imminent, apparently demanded by James and Lachlan Murdoch, Rupert’s more liberal sons who now run the corporation.

“I don’t think anybody’s salivating. I don’t believe that at all,” he said.

Bernstein also said that the cable networks had “grievously failed” to adequately report aggressively on Trump.

“It seems to me that all the networks — cable and the traditional networks — have grievously failed by not doing investigative documentaries about the candidates,” he said. “The vast reportorial failure is egregious. Even though they did great on the debates, covering the debates, analyzing the debates … do I think there was too much cutting to the theatrics on all of cable? Yes.”

However, Bernstein said he did not think CNN had sinned worse than other cable networks in this regard. “I don’t,” he said, when pressed on the matter. “There is a formula that should’ve been thought through a little more in terms of, ‘Hey, let’s wait and see what they [candidates] say and run it later.

“Everybody in this cycle has been learning as we go around,” he continued. “We should’ve been doing more reporting, and by ‘we’ I mean all of cable and all the networks.