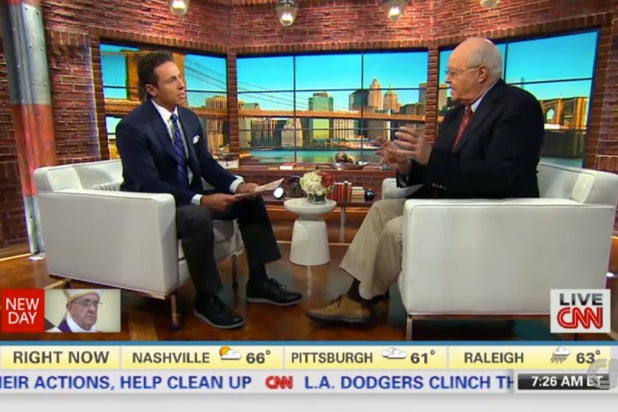 Chris Cuomo’s Friday interview on CNN’s “Ncw Day” with Catholic League president Bill Donohue quickly changed from the Pope’s latest statements about shifting the focus of the Catholic Church away from its “obsession” with gay marriage, birth control and abortion to Donohue’s thoughts on homosexuality and the role of the Jews in Hollywood.

Spoiler alert: Donohue’s not keen on either of them.

Cuomo said the Pope’s message seemed to be for Donohue, who has been quite vocal about the very things the Pope asked his followers to stop harping on.

“It sounds like you’re one of the people he’s sending this message to, to be fair,” Cuomo said, describing Donohue’s part statements as containing “really incendiary, flagrant, divisive stuff.”

“You’re saying you won’t do that anymore?” Cuomo asked.

“Oh, no, I will always tell the truth,” Donohue said. By his logic, since the vast majority of the victims of sexual abuse by priests were post-pubescent males and 100 percent of the abusers were male, “the word in the English language is not pedophilia, it’s called homosexuality.”

Also read: How Pope Francis’ Gay Comment Was Oversold by the Media

“You just heard what the Pope said,” Cuomo said. “Why wouldn’t you move past this parsing rhetoric and try to be what your church is supposed to be about?”

“A rapist could be straight or gay, I’ll give you that much,” Donohue said.

Donohue insisted that he was simply “pointing out the obvious,” and while the Pope may have asked him not to “focus” on the topic, “he didn’t ask me to shut up about the truth.”

Cuomo then asked Donohue about his past statements on how “it’s a fact” that Jews in Hollywood don’t like Catholics. “Those are the kinds of things you shouldn’t say anymore,” Cuomo pointed out.

“Is it the Vietnamese who are making movies in Hollywood? Is it the Puerto Ricans who own Hollywood?” Donohue said.

“Do you understand how that sounds?” Cuomo asked. “Do you think that that’s good for Catholics to be represented by this?”

Donohue said that the only thing he was doing what stating the obvious. “If I mention that the Chinese live in Chinatown, am I considered now a bigot? To point out the obvious?” Donohue said.

By the time Donohue got around to attacking nuns who act as “social workers” rather than “tending to the poor,” Cuomo had enough. He ended the interview by saying they both “hope that the Pope’s message is understood.”