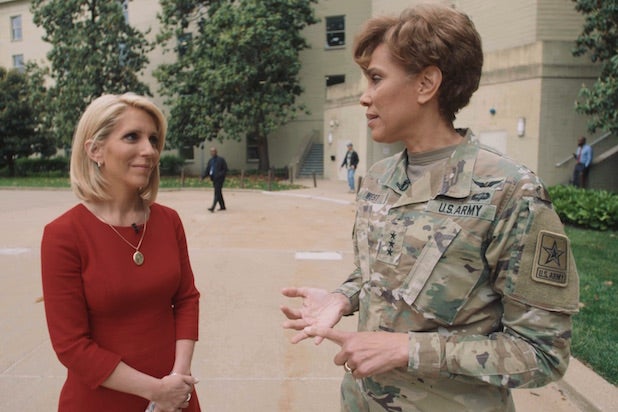 CNN’s Dana Bash launched “Badass Women of Washington,” a web series that will air on CNN in parts over the coming weeks, and she had no problem finding subject matter because “there are so many badass women” in the nation’s capital.

The series came to fruition earlier this year when Bash had a conversation with some CNN colleagues about Hillary Clinton losing to Donald Trump on Election Day. They openly pondered when and if a female would run the country when the conversation took a sudden turn.

“I thought, ‘Wait a second, there are so many badass women already in Washington who have broken so many barriers,'” Bash told TheWrap. “The series just kind of took off from there.”

The women were chosen for a variety of reasons. Chao is first Asian-American woman to serve in a President’s Cabinet, while Romney McDaniel is the first female to run the RNC in three decades. They all have one thing in common other than being a female and it’s being a badass in the nation’s capital.

The women include three Republicans, three Democrats and a three-star General.

Bash said the older women who she featured told her stories out being out of place in D.C.

“People thought they were out of their minds,” Bash said. “Feinstein, in particular, she graduated from Stanford in the 1950s.”

Feinstein told Bash that her friends wanted to finish school, get married and have children, but she started a career in politics instead. The 83-year-old Feinstein joked with Bash during filming that many people assumed she had a bad marriage when she first started her career.

“She’s one of many, many, many women who helped pave the way for the younger generation,” Bash said.

One of the younger women that Feinstein helped break barriers for is 38-year old Herrera Beutler, who is only the ninth person to give birth while serving in Congress.

“They’re running younger, they’re going to Congress and other things younger and, therefore, having their babies younger,” she said. “For that generation, what I found fascinating, is that one of the main reasons why they can thrive as working mothers is because they have men who consider it OK to take a step back.”

Herrera Beutler’s husband quit law school to stay at home with the couples’ children so she can serve.

“He’s basically a full-time dad right now,” Bash said. “It’s a real partnership in a way, frankly, a generation ago would not have viewed it that way.”

“Badass Women of Washington” launches on Tuesday, June 6 on CNN.com