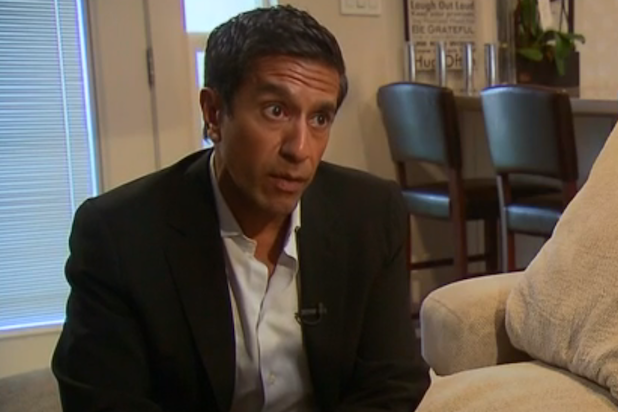 In a recent interview with CNN chief medical correspondent Dr. Sanjay Gupta, the family of former Minnesota Vikings linebacker Fred McNeill and Dr. Bennett Omalu discuss how McNeill may be the first NFL player to receive a pre- and post-mortem Chronic Traumatic Encephalopathy (CTE) diagnosis. McNeill’s wife told Gupta that after doing some research she reached out to Omalu, the doctor portrayed by Will Smith in the movie “Concussion.”

Omalu suspected that McNeill suffered from CTE back in 2012 and approached the family about a new technology that he helped develop. When Omalu and his team examined McNeill’s scan, there were angry red splotches all over his brain. Upon his death, a diagnosis of CTE was confirmed. We caught up with Gupta to discuss CTE, O.J. Simpson and even if Will Smith was the right choice to play Dr. Omalu.

TheWrap: In layman’s terms, why can’t CTE be diagnosed before death?Gupta: There hasn’t been a test available to find these, what would be considered microscopic changes in the brain up until, potentially, recently. It’s almost a technological problem; even if you look at the brain, just examine the brain, without going in deep with a microscope, you wouldn’t find these changes associated with CTE. They’re buried deep within the brain. The technology is just now starting to catch up.

If this new technology allows for diagnoses before death, how would that help save lives?
This is a really important question and the answer is that, for the time being, it probably will not help save lives. There is nothing that most people can even do about it. It’s kind of like the same thing with Alzheimer’s disease. If you’re told there is no cure and no specific treatment, would you still want to know?

How close are we to finding a cure?
The similarity would be to Alzheimer’s disease. We’ve been looking for effective treatments and cures for Alzheimer’s for a long time and, you know, we’re obviously not there yet. There are a lot of similarities between CTE and Alzheimer’s. I don’t think people are talking about a cure right now. This is something that has just been identified in football players over the last 10 to 15 years. A lot of scientists are certainly looking into, at least treatments, if not cures.

Do you believe, as Dr. Omalu has stated, that O.J. Simpson is suffering from CTE?
Well, I’ve never met him or looked at his medical records. I’ve never, you know, examined him or anything like that so it’s hard to say … Now, I don’t think that Dr. Omalu has examined O.J. or knows him at all, so I’m not sure how he can say that with any degree of certainty. But I think based on his own piecing things together, from O.J.’s career and other things, that he thinks O.J. Simpson could have had CTE. By the way he also told me that he believes Muhammad Ali doesn’t so much have Parkinson’s disease as he has a form of CTE that has led to this tremor of his.

Again, I just want to be very careful to say that my understanding is Dr. Omalu has not seen, examined or know either Muhammad Ali or O.J. Simpson but that is something that he has expressed to me.

Have you seen “Concussion?”
I have, yes.

What are your thoughts on the decision to cast Will Smith as Dr. Omalu?
I thought Will Smith did a fantastic job of portraying Bennett Omalu. I’ve known Omalu for a long time and he is that passionate guy. It’s funny, I interviewed him again after I watched the movie and it’s funny now to see Omalu being the guy that Will Smith portrayed on the screen. That is really him. I think it was a good decision. I do think, having watched the movie, knowing Bennett Omalu, that Smith did a great job.

How accurate is the film?
I thought the science was actually quite good in the film. I thought maybe they were going to shy away from the science, but they actually put a lot of science in there. I did have a chance to ask Dr. Omalu, and it was his life they were representing. He thought it was great.

Dr. Omalu recently told the L.A. Times he wouldn’t watch the Super Bowl. Will you tune in on Sunday?
Yeah, I’m going to watch the Super Bowl. I’m a football fan. I’ve done a lot of reporting on football over the years. We reported on CTE when no one was really talking about it, and people thought it didn’t exist, frankly, at the time. One of the conclusions I came to was that it’s obviously a game where there is always going to be fair amount of risk and a significant number of head injuries, but I do think it can be played more safely than it is now. They’ve already made some rule changes which are starting to improve that. It’s going to have to continue to change as we learn more and more. But I do still enjoy watching it.

It’s Super Bowl 50. Will the NFL still be around for Super Bowl 100?
I think the NFL is going to have to have some dramatic changes in not only of football but I think dramatic changes in how they take care of these players after they leave the league and even during their time in the league. One thing I’ve learned from the story on Fred McNeill is that, you’ve got a guy in his 40s. He’s in his 40s, he’s a handsome, physically robust guy, he was a lawyer. He went to law school after he left the NFL and practiced in California. In his 40s he developed CTE and there is no place that exists for a guy like him to go. He’s not going to go to a nursing home where people are three or four decades older than him. So, the NFL is going to have to address how they take care of players. If they don’t address some of these things with regard to the health of players during the season and how they care for them afterwards, then I don’t know how the NFL still exists or how the players allow an organization that doesn’t address these things to continue to exist.

If you had a son would you allow him to play football at the youth level?
I probably would not. It’s not an easy decision. If my son really, really wanted to play — first of all I’m not a particularly big guy so it’s not like my son is going to have a big future in football. There is no question that if you’re a kid playing football, you’re going to take blows to the head.

Can we get a Super Bowl prediction?
Denver. I think as I’ve gotten older, I tend to root for the older guy. Peyton Manning– people love him or hate him — the guy had an incredible comeback. The guy had neck surgery and they thought he wasn’t going to play again, let alone play in a Super Bowl again. I love his story.