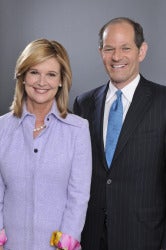 Eliot Spitzer and Kathleen Parker had never met until last month, when CNN approached them about reviving the struggling network's 8 p.m. hour.

Spitzer and Parker said their show will be a "cocktail party" featuring discussions on an "eclectic" variety of topics.

"What we're going after," Spitzer said, "is unpredictable."

Spitzer is a former Democratic governor of New York who was ousted after his expensive call-girl habit was discovered by federal investigators. Parker, a self-described conservative, is a syndicated columnist who won a Pulitzer Prize for commentary in May.

Spitzer joked that the two of them "are going to draw straws before each show and figure out who takes which side." All kidding aside, though both hosts have opposing political perspectives, they insist their show won't be a standard liberal vs. conservative shout-fest.

"We're really taking a nonpartisan approach to everything. … There are going to be many times when we reach the same conclusion," Parker said. Spitzer agreed, adding, "We're both opinionated and we both have certain views, but we're also both open-minded and open to persuasion."

Both hosts also stressed that they want their show to focus on the larger discussions behind individual issues. Spitzer, who was known as the "Sheriff of Wall Street" during his brief tenure as governor of New York, cited coverage of the financial crisis as an example of an area where this broader focus would be advantageous.

"What happened on Wall Street was symptomatic of larger issues in the way government and business work," Spitzer said.

Parker said she and Spitzer first met "about a month ago when we were approached by CNN." Though they don't know each other well, after their first day on the job, Spitzer was already confident that they'll get along swimmingly.

Campbell Brown previously occupied the 8 o'clock hour for CNN, but she quit in May amid low ratings. Brown averaged approximately 590,000 viewers per night in the first five months of 2010, well behind Olbermann and O'Reilly, who averaged 1.03 million and 3.34 million viewers, respectively.

CNN insiders have told TheWrap that, prior to trying out Brown's show, the network considered filling the 8 p.m. hour with a "Daily Show"-style blend of comedy and commentary, but Spitzer and Parker both said they have no plans to take a humorous approach with their show.

"We're not going to go after Jon Stewart on his turf," Spitzer said. Parker added, "We're naturally amusing people — to the extent that there's going to be any humor involved, it will be produced by us in an organic way."

Spitzer and Parker will be sharing their CNN stage with a variety of guests, but they wouldn't reveal the names of any of their planned contributors just yet. Parker said some of the guests will be people "you probably haven't heard of" rather than familiar faces from the political talk show circuit. "We're hoping to make them stars," Spitzer said of the show's guests.

Whoever they invite to join them on air, it sounds like viewers should expect a free-flowing conversation. "We're going to take more or less a blog approach, meaning that the content of the show will be pretty eclectic," Spitzer said.

Parker described their vision of the show as a "cocktail party"-style discussion. Her co-host agreed with the metaphor.

"We're going to have a cocktail party every night from 8 to 9, just let us know what you're drinking," Spitzer said.