As 2021 starts wrapping things up, CNN’s Jim Acosta is already giving out end-of-year superlatives. And he has dubbed Tucker Carlson the 2021 “Bulls— Factory Employee of the Year.”

Acosta began by criticizing Fox News as a whole, first mocking Laura Ingraham and Raymond Arroyo’s segment in which Ingraham seemingly did not know about the show “You” on Netflix, turning it into a “Who’s on First” moment. Though viewers were initially confused, Arroyo did later confirm on his Twitter that it was a pre-planned bit.

Acosta then turned on Jesse Waters’ coverage of the deadly Astroworld concert tragedy, before eventually turning his ire on Tucker Carlson.

“Tucker Carlson, your suggestion that Kamala Harris isn’t quite American because she spent part of her childhood in Canada has put you over the top,” Acosta said. “We once honored you with the distinction of ‘Bulls— Factory Employee of the Month.’ But now that 2021 is coming to an end, we decided to recognize you as our first ever ‘Bulls— Factory Employee of the Year.’ That’s right Tucker, you’ve earned it.” 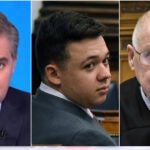 Acosta added that it wasn’t just Carlson’s digs at Harris that set him apart from the rest.

“You’ve spent the last year peddling vaccine conspiracy theories about Bill Gates, you’ve served as a mouthpiece for white supremacists who embrace the ‘Great Replacement’ theory,” Acosta said. “You spread the false flag conspiracy theory that Trump supporters were not responsible for the insurrection on January 6, only to contradict yourself days later.”

Acosta then touched on Carlson’s “latest lowlight”: his upcoming documentary, filmed by a crew that was following Kyle Rittenhouse through his trial that ended Friday with acquittal on murder charges.

“What makes this so shameful is that you were filming this latest piece of one-sided, right-wing propaganda while Fox was slamming other media outlets for their coverage of the trial.” 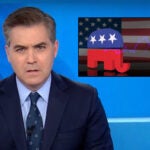 Also Read:
Jim Acosta to GOP Lawmakers: You Want to Shock Us, Tell the Truth (Video)

Acosta also took a swipe at Sen. Ted Cruz during the segment, prompting the Texas Senator to fire back on Twitter, calling Acosta a clown.

Representatives for Fox News did not immediately respond to TheWrap’s request for comment.

You can watch the moment Acosta “crowns” Tucker Carlson in the video above, and watch the full segment here.