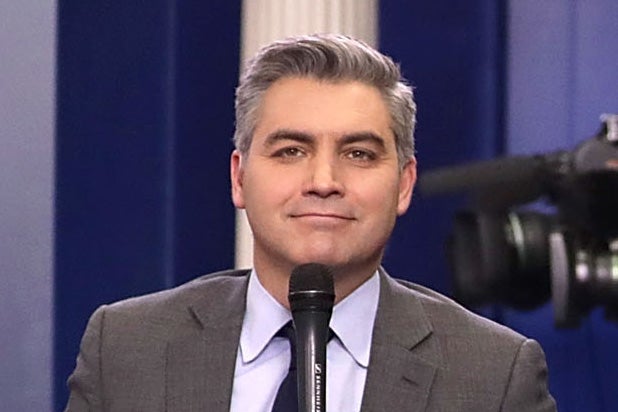 CNN’s Jim Acosta will be honored with the New York Press Club’s “Truth to Power” award, the organization said in a press release  Friday. The award honors “an individual whose body of work challenges the power establishment and/or defends journalists.”

“We are proud to honor a man such as Jim Acosta, who has proven himself throughout his storied, decades-long career to be a journalist of the utmost integrity, ” Jane Tillman Irving, president of the Press Club, said in the release. “For his unwavering commitment to fact and journalism, we are pleased to add to Jim’s many accolades with the Gabe Pressman ‘Truth to Power’ award.”

Reps for CNN did not immediately respond to request for comment on the honor.

Acosta, the channel’s chief White House correspondent, spent years in relative obscurity on CNN until Donald Trump’s victory in the 2016 presidential election. Trump has made CNN the primary target of his attacks on the media and has disparaged the network as “fake news.”

In his role as White House correspondent, Acosta has often butted heads with Trump and his top surrogates from the White House briefing room and elsewhere. Things came to a head last November after Trump moved to revoke Acosta’s White House press credentials.

“The Supreme Court has held in no uncertain terms that the First Amendment protects ‘robust political debate,’ including ‘speech that is critical of those who hold public office,'” said their attorney, former United States Solicitor-General Theodore Olson, in a statement at the time.

A judge ultimately ordered the White House to back down, but Trump warned he would press the issue again for any journalists who violated briefing “decorum.”

“People have to behave,” Trump said, adding that if reporters “don’t listen to the rules and regulations, we will end up back in court and we will win.”

CNN has consistently stood by Acosta’s reporting, promoting him to chief White House correspondent in January 2018.