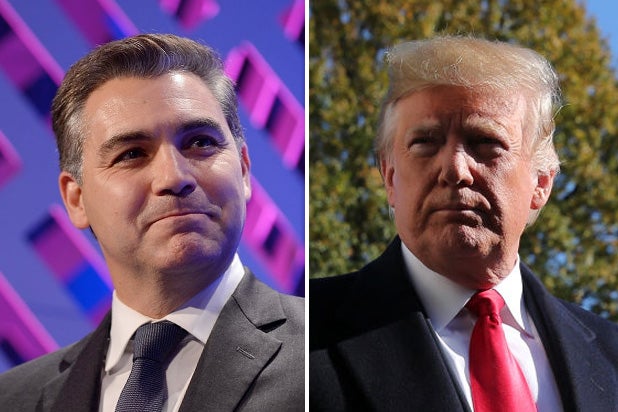 Things are about to get real.

CNN’s chief White House correspondent Jim Acosta has inked a deal to write a book about the Trump administration’s battles with the news media.

The book, titled “The Enemy of the People: A Dangerous Time to Tell the Truth in America,” was announced by the Harper imprint of HarperCollins Publishers and will include “never-before-revealed stories of this White House’s rejection of truth, while laying out the stakes for how Trump’s hostility toward facts poses an unprecedented threat to our democracy.”

“Acosta, the most visible member of the media branded an ‘enemy of the people’ by President Trump, exposes the tumultuous and dangerous realities of the current White House and its war on truth and the first amendment,” HaperCollins said in a press release Thursday.

Acosta has become a favorite target of Trump supporters during the president’s boisterous rallies. He has also repeatedly clashed with the president and White House Press Secretary Sarah Sanders.

In November, The White House suspended Acosta’s press credentials after the president took issue with questions Acosta asked at a news conference. (The credentials were later reinstated after CNN filed a lawsuit).

“Acosta unveils the chaotic first two years of the Trump administration detailing, for the first time, his view from the frontlines of Trump’s relentless war on the media,” the press release read. “Going inside the briefing room and onto Air Force One with the White House press corps, Acosta reveals the conversations, battles, and near-constant conflict that define life for a media working to hold the Trump administration accountable for its actions and its words.”

Acosta said he was writing the book to “share what I’ve experienced covering President Trump during his first two years in office.”

“This sobering, bewildering, and sometimes frightening experience has made it absolutely clear that this is a dangerous time to tell the truth in America,” Acosta said. “The president and his team, not to mention some of his supporters, have attempted to silence the press in ways we have never seen before. As just about everybody has seen, I have witnessed this first hand.”

The book is slated for a June 11 release.

Acosta is represented by lawyer and literary agent Bob Barnett.