(Please note: This preview focuses on private invite-only events aimed at an industry audience. There are many ticketed events open to the general public, some of those even have performers from the festival. If you can buy a ticket to it, it's not here. For clarity, there are no "Coachella Parties" other than Goldenvoice's festival at the Empire Polo Grounds in Indio, California. All other events are unofficial side parties not affiliated with or endorsed by the festival.)

Coachella 2019 is this weekend and is loaded with all kinds of new comforts (Postmates, Amazon delivery, a food lineup better than any food festival in Los Angeles), new attractions (including, a highly anticipated new DoLab), the Grammy album of the year winner (Kacey Musgraves), rarities like Aphex Twin, and the most popular mainstream musicians of this moment.

But for many, nothing beats the satisfaction of sliding behind a velvet rope to a mansion loaded with open bars, clean-ish bathrooms, questionable April bathing suit fashion, and a transplant of the Hollywood nightlife, media, and publicity social scene 130 miles to the east. For those who "only go to Coachella for the parties," here is your lineup.

Last year, the proto-stylist's fashion huddle generated one of the iconic groupings of the weekend. "We are so excited to bring the decadence of the French Riviera to Palm Springs for a glamorous evening under the desert sky," Zoe said in a statement announcing her 2019 event. Victoria Justice, Madison Grace, Kiernan Shipka and Paris Berelc are expected, all sporting the host's new collection. 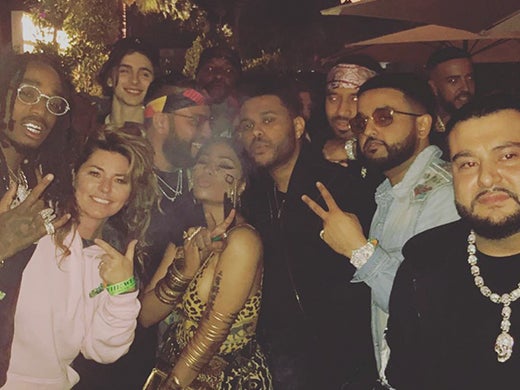 TheWeeknd celebrated his 2018 headlining set at TAO's pop-up with Quavo from Migos, Shania Twain, TImothée Chalamet, Nicki Minaj, and French Montana, amongst others. (Photo via Instagram.com/TheWeeknd)

After The Weeknd headlined on Friday night last year, he came to celebrate here with friends ranging from Nicki Minaj to Shania Twain and Timothée Chalamet. Unlike TAO's popular Sundance pop-up nightclub, this event has stayed underground and hushed. Just like L.A. nightlife before social media, TAO's foray in the desert is buttoned up and impenetrable. They are only throwing a party one night this year, but when they draw talent like this, once is enough.

This is not the place to post about a Hadid fashion choice or indulge a clumsy brand integration. The renowned Rhonda party circus touches down on a giant plot of land for what should be a dance party where guests actually get sweaty. Unlike other parties that book an influencer to pretend to DJ, this lineup features real talent. Nina Kraviz will follow up her headlining set in the Mojave tent at Coachella by playing here later that night. Virgil Abloh will warm up for his Saturday evening slot at the festival here as well.

This is a clothing company spends and spends on a multi-week marketing campaign across L.A., the desert, and the influencers who float between the two in April. Part of its footprint is a pop-up store on Melrose for festival shopping. In the desert, its centerpiece will be two day-time parties that are full-fledged festivals. It books its own musical lineup that goes heavy on hip hop. Coachella alums ScHoolboy Q, Rae Sremmurd, and 2 Chainz will be joined by SZA. As the quintessential "big" side party, it scratches fills a need for influencers and wannabes who don't want to pay for bands or brave the dusty masses in the fields.

This is one of young Hollywood's preferred post-show stops on the first day of the fest each year. It has mainstream industry support behind it: Annapurna Pictures, Warner Bros. Records, and Lyft are partners, but the special California-style drinks are what people will be talking about.

Nylon is having a special area pouring cannabis-infused "social tonics" from CANN. Invite-only guests will be the pioneers, as the drinks don't come out to the mass market until this summer. After a day and night on the fields with Childish Gambino and DJ Snake, they are (smartly) angling it to party guests as "the lightest THC dose on the market."

New motto: You can always have more. But you can't have less. Be safe, everyone.

The New York Times chose a few glossy photos of events at this property for its feature on the thriving side-party scene at Coachella a few years ago. Cash App's rental mansion is a gem. Winning points for proximity, it is just about across the street from the festival itself. The frequent podcast sponsor promises its guests an open bar, taco carts, art installations, and surprise DJ sets....without dropping any cash. The marketing muscle of the dFm is behind the scenes, a hefty endorsement for this new event.

Lyt, the mobile dispensary and cannabis concierge, is appropriately hitting the road. Note: This is not "Lyft," but their mobile prowess is also strong. They claim to be the only dispensary that keeps products on-hand in delivery vehicles for immediate fulfillment. With LA Weekly, they will be have a gifting suite and pool party at the swank property on Friday afternoon and a recovery brunch on Saturday. Expect to see some familiar faces from the L.A. event scene working the ropes.

L.A.'s nightlife czars John Terzian, Brian Toll, and the h.wood group have been hosting this bash for seven years. Getting the club-set of young Hollywood to chow down on McDonald's in bathing suits is some sort of magic trick. Also, they will pull rapper Rich the Kid out of their proverbial hat to perform poolside.

It has been a good week for Terzian and team. They just announced that their West Hollywood supper club, Delilah, is expanding to the Wynn in Las Vegas next year, kicking off a new era of L.A. nightlife migrating to the other desert.

The owner of 1Oak LA, the still bustling nightspot on the Sunset Strip, is throwing a three-day pop-up. Miguel, a Coachella 2018 sub-headliner, will perform.

"Between our stunning venue and the level of service we are offering, guests can expect nothing but an elevated experience," Dzienciol said while announcing the event. His partners include V Magazine, Nana Judy, and exclusive concierge company Velocity Black.

Brent Bolthouse and Jeffrey Best's big news is that their overnight carnival is expanding to the same weekend as Stagecoach. They also allowed influencers to self-nominate for admission consideration on their website a few weeks ago. Read all about the changes underway at the original celebrity conclave in The Party Report's exclusive here.

Notice that this is the first and only party with Coachella in it's name? The automaker has an official partnership with both the "Eastside" singer and the festival itself, a collaboration that Coachella revealed on its instagram a few days ago. Before Khalid takes to the main stage on Sunday night, he's going to drop in at this pop-up party on Saturday afternoon. There will be food trucks, festival bandanas, a vehicle touting Khalid's new album art work, and you can actually get in to this one: This one, just this one, is actually open to the public.

Fullscreen and beGlammed invade Palm Springs with an array of beauty brands for a freebie suite of festival-prep services: makeup bars, manicures, braid bars, and a hosted bar. Shaun Ross and model Joel Mignott (who will DJ) are the honorary hosts.

Except for the Khalid shindig, all events are private and by invitation only. Please send invites, updates, and details to the writer Mikey Glazer, here.