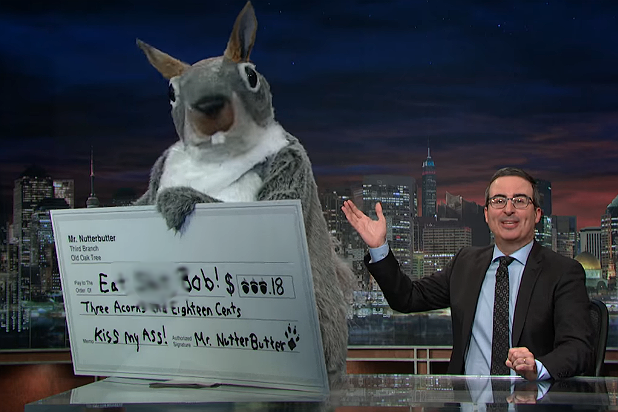 The suit, filed by Murray Energy CEO Robert E. Murray in June, accused Oliver of defamation for a June 18, 2017 episode of “Last Week Tonight” that featured a scathing critique of Murray’s safety record, including a detailed look at a fatal coal mine collapse, as well as his business practices and political activity. The episode notably featured an actor dressed as a talking squirrel named “Mr. Nutterbutter,” who held up a giant sized check that read “Eat S— Bob.”

Murray contended in his suit that the episode caused fans to flood him with messages calling him a “f—ing scumbag,” and “rich greedy a–hole.” He also said people believed he was to blame for miners’ deaths, and that Oliver libeled him.

But in its motion to dismiss, HBO defended Oliver on First Amendment grounds, arguing that the episode was not defamation because it was based on a government report that debunked Murray’s claim that a deadly coal mine collapse was caused by an earthquake. HBO also argued that other statements were opinions and jokes, not factual assertions.

“Plaintiffs,” HBO’s motion said, “do not come close to satisfying the legal requirements
for these speech-based tort claims. In fact, their complaint disregards long-settled First
Amendment and common law protections for the two types of speech challenged here: accurate
reporting on government activity, and commentary and satire on matters of public concern.”

Also Read: John Oliver Confronts Dustin Hoffman Over Sexual Harassment: 'You Were a Creeper Around Women'

HBO said Murray’s accusations were a matter of “hurt feelings about jokes,” and said jokes are protected speech.

The legal website Lawful Masses first reported that the case was dismissed.

Attorneys for HBO and Murray did not immediately respond to requests for comment from TheWrap.